More than 200 attended the session at West Potomac High School 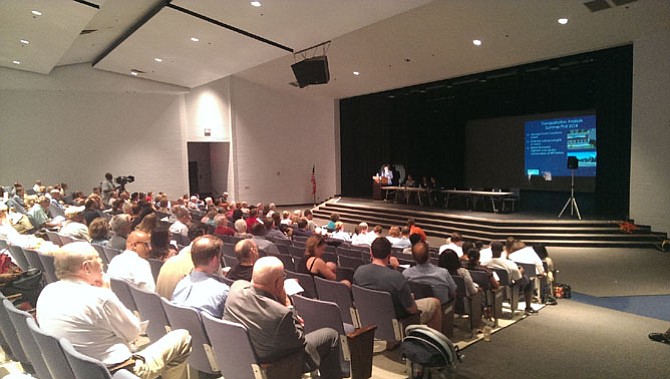 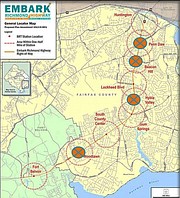 A map of one of the proposed street grid network sites includes routes for the various modes of travel and transportation as well as open space. 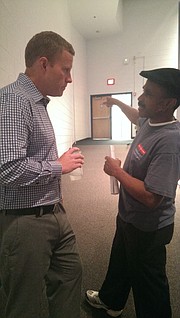 Embark is the multi-agency, multi-phase, multi-year intiative for completely redeveloping the Richmond Highway corridor for multiple forms of public, private and human-powered transportation, as well as economic and residential harmonious growth.

This spring, an advisory group appointed by Supervisors Jeff McKay (D-Lee) and Gerry Hyland (D-Mount Vernon, former) worked on assessing existing conditions along the highway and moved forward with gaining guidance for policy for Bus Rapid Transit (BRT) and Metrorail — two of the largest components in the transportation revitalization of the corridor.

At the July 25 meeting, Embark group members described the current ideas for BRT stations, street grid networks around community business centers and cross sections of streets that include the public transportation as well as road widening and bicycle and pedestrian facilities.

After the presentation, which is available online, the community was invited to move to the school’s cafeteria for an informal question-and-answer and feedback session with members of the advisory group, county staff and elected officials.

Stewart Schwartz, Executive Director of the Coalition for Smarter Growth, attended the presentation and thought Supervisors McKay and Dan Storck (D-Mount Vernon) set the right tone about the importance of planning comprehensively with a positive vision for the future.

The staff is getting the transportation and land use components right including frequent transit, a network of local streets, safe street designs for pedestrians and bicyclists, and good urban form - with buildings built to the sidewalk rather than set back,” Schwartz said.

But Schwartz added the coalition is urging Fairfax County to integrate specific policies and financing strategies to preserve existing affordable housing, avoid displacement and add new affordable housing in the area of Route 1.

“Just because the garden apartments with affordable units may not be within the defined commercial areas of the plan,” Schwartz said, “doesn't mean that investors won't see the value in these apartments and bid up their prices and rents.”

Barbara Byron, Fairfax County Director of the Office of Community Revitalization, said the goal is to have a comprehensive plan amendment prepared to go before the Board of Supervisors by December 2017. That amendment would set the overall vision and population densities required to bring in BRT and Metrorail.

“We want to be sure that BRT, when it comes, will be successful,” Byron said. “That means showing planned density. We know it won’t be Tysons density, but it shouldn’t be Burke density, either.”

Some have complained that the process isn’t moving fast enough, that it doesn’t have the same perceived thrust of the development and addition of Metrorail to Tysons.

Supervisor McKay said there has to be a balance in taking the time to address myriad complex concern in order to “do this comprehensively,” as well as keeping the effort on schedule.

Supervisor Storck addressed the timeline that has BRT coming to the corridor within 10 years.

“We need to speed this up, like to see BRT first runs in five years,” Storck said. “That’s unacceptable to me, and other elected officials in Fairfax County. This community is ready. They’ve been ready for years.”

The third community meeting will be scheduled some this fall. The main project website for Embark Richmond Highway is located here.