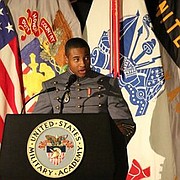 Cadet Eugene James Coleman, III, son of Eugene and Martha Coleman of Alexandria, graduated from the U.S. Military Academy on May 21. Coleman graduated from Mount Vernon High School in 2012. While at West Point, he concentrated his studies in economics and management. He was First Captain over the 4,400 cadets and president of the Class of 2016. He was also commissioned as a second lieutenant in the U.S. Army within the Field Artillery branch and will report to London, United Kingdom for his first assignment.