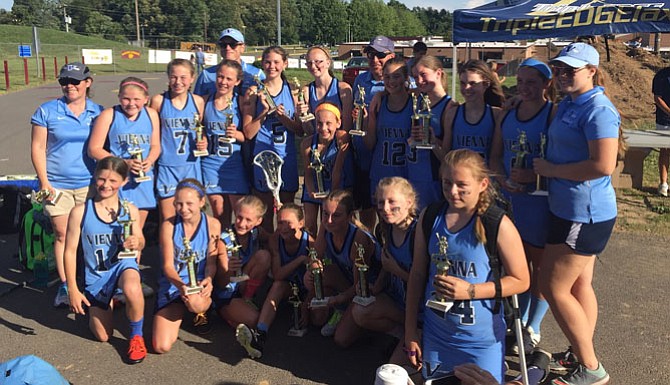 The fifth/sixth grade Vienna Youth girls’ lacrosse team, the Hawks, closed out their undefeated season with a tournament win over McLean. The championship game was played on June 12 at Oakton High School.

“This was a special group of girls,” said Hawks’ head coach, Scott Knisley. “We just plucked them together and they meshed.”

Girls’ lacrosse differs from boys’ lacrosse in several meaningful ways. In girls’ lacrosse, the players use no safety equipment, except for the goalie. The sticks are constructed differently, as well, and no one but the goalie is allowed in the goal crease. Knisley describes girls’ lacrosse as “ice hockey on grass.”

“I like playing with my team and I like it when I have the ball,” said fifth grader Ava Dirth, playing attack. “I like it when I’m scoring goals or getting an assist.”

The Hawks’ first game was on April 3 at Fort Hunt where they won 12 to 2. The second game, on April 10 at Annandale, gave the Hawks a huge 16 to 0 victory.Third game, at home on April 16 against Prince William, the Hawks won 8 to 4. Their five remaining regular-season games were all big wins, as well.

The season culminated in the championship win over McLean 11 to 9, a fitting end to a perfect season.

All the girls were sixth-graders except Ava Dirth and Mary Grace Songer. Daisy Anderson led the team in goals in the regular season with 15, and Emily Knisley, Sophia Laubner, and Katie Koshuta were second with 12.

The defense was solid all season with Avery Bath,Kaela Gordon, Devon Almquist, and Eve McDonough holding off opposing attack players, Coach Knisley said, and there were some games in which some of the defensive players never came out of the game for rest. Mary Grace Songer was outstanding in goal with 13 saves in one of the playoff games, Knisley said.

Katie Koshuta lead the playoffs with 18 goals followed by Sophia Laubner with 5 goals. During the regular season, the Hawks scored 108 goals and allowed only 34.

In the playoffs the Hawks scored 39 goals and allowed 24.

“It’s fun,” said Dirth, starting a traveling team season in mid-June. “And it’s a good way to stay active. You make a lot of friends, too.”