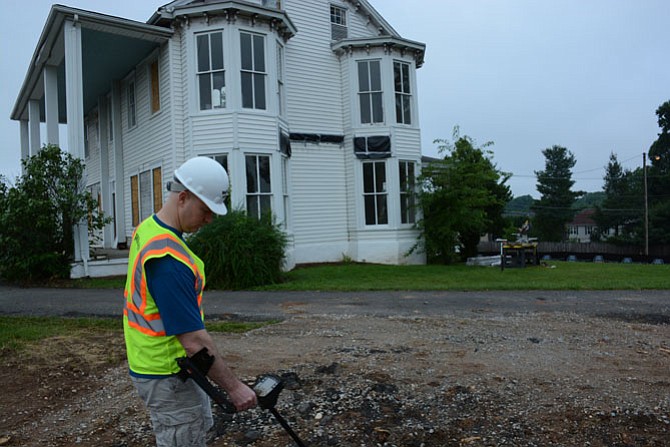 Brian Kabat has visited the property of the Silas Burke House ten times since February this year, scanning the grounds for any objects of historical or cultural significance. Photo by Tim Peterson.

Kabat’s metal-detector can accurately spot a target down to the size of a small coin.

Sunrise Senior Living plans to build an assisted living facility on the Silas Burke property on the other side of the house from its iconic perch overlooking Burke Lake Road.

Kabat holds a segment of copper pipe inside iron that was found beneath an old white oak tree on the Silas Burke House property. It may have been an old iron sewage pipe that went to a septic tank.

The vast majority of what Kabat has found within one foot from the earth’s surface, unsurprisingly he said, is trash. 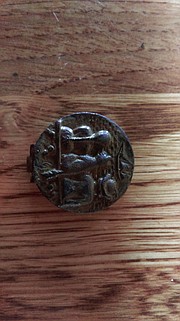 A folding clip of some kind Kabat found on the Silas Burke House property depicts two people sitting on a pier with an animal, looking at a ship.

Twelve inches to Brian Kabat can be worth 150 years, or more. That’s the depth up to which his metal-detector can accurately spot a target down to the size of a small coin.

The Burke resident has visited the property of the Silas Burke House ten times since February this year, scanning the grounds for any objects of historical or cultural significance.

“My goal was to add a little sprinkle of humanity to the property,” Kabat said, “telling stories of those who inhabited it through the years.”

Kabat set out to find artifacts in the property that was built circa 1824.

In February, Kabat contacted Sunrise Senior Living, which purchased the property from the previous owners Terry and one-time resident Suzi Fowler Neal, and plans to build an assisted living facility on the grounds. The name of the facility will be Sunrise at Silas Burke House.

Sunrise agreed to maintain the house and open it periodically for various Fairfax County groups.

Kabat is active duty U.S. Air Force, a father and husband. He has been metal-detecting as a hobby since he was 12. In 2014 he completed a certificate program in archeological metal-detecting offered at James Madison’s Montpelier.

He said the program caused him to look at the hobby in a different way, see artifacts in a greater context.

“It’s been 150 years since anyone’s touched this, or pulled it out of the earth,” Kabat said. “It tells you something about people who used to live there.”

Content with his credentials, Sunrise allowed Kabat to survey the property. Part of his offer was that he would hand over any of his findings to them. Sunrise hasn’t made a decision yet as to how, if at all, Kabat’s discoveries might be used or displayed.

So far, Kabat has uncovered a variety of items, from medical alert jewelry and part of an iron ax head, to a decorated silver spoon and artillery shells. But the vast majority of what he’s found, unsurprisingly he said, is trash.

Thousands and thousands of beer cans and pull tabs were just under the ground on the far side of the house, out of view of Burke Lake Road.

Kabat had hoped to be around for earth-moving equipment to start digging a bit deeper, allowing him to take his equipment down further than before. But this project will have to be put on hold, as he and his family are in the process of moving to Colorado.

Whether someone else will take up the metal-detecting mantle in his stead remains to be seen. But the window won’t be open for long. According to Wohlsen Construction Superintendent Mark Harman, construction areas on the property that are being dug out will soon be covered in 30 new feet of dirt.

“If it’s not found now,” Harman said, any artifacts left may be lost forever. “That’s the sad part.”

Harman said workers try to catch the buckets of dirt as they roll through the earth-moving process. “Do we keep an eye out” for anything with surface-level historical value, he said, “yes.”

Harman and Kabat acknowledge they’re not the only ones out there digging around.

“Trespassing is one of the things that ruins this hobby,” he said. “There’s no doubt in my mind someone’s been at the property before, it’s been cherry-picked for years.”

Clearly, he said, the other treasure-hunters had avoided working where they would be visible to bypassing traffic.

Aside from the rogue detectors, Kabat always appreciated the “amazingly peaceful” mornings he spent on the property. And his opportunity to spend them there thanks to Sunrise.

“What’s really impressed me,” Kabat said, “is their effort to preserve the historic property.”