It Takes a Village
Votes

It Takes a Village 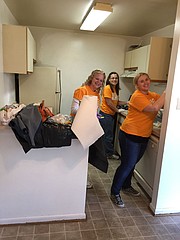 Employees of Helios HR volunteer for Cornerstones, Inc. in Reston which provides support for those in need. Such charitable efforts help create an awareness of the extent of homelessness in the community and breaks stereotypes about homeless people.

To donate or get more information, go to

When speaking with Kathy Albarado, one might not guess that she’d experienced periods of homelessness as an adolescent. Her success, confidence and ability to inspire others are readily apparent. However, her childhood experiences have given her insight into the magnitude of the problem with homelessness in Fairfax County.

“I was in and out of transitional housing," said Albarado, who is now president and CEO of Helios HR, a Reston-based human capital management consulting and talent acquisition firm. “Transitional housing bridges the gap. It helps [homeless people] get back on their feet.”

It is that first-hand knowledge that led Albarado and Helios HR to the Fairfax County Office to Prevent and End Homelessness "Build a Village Campaign," a collaboration of local chambers of commerce, businesses, faith groups, non-profit organizations and individuals dedicated to raising awareness and funds to benefit the county’s homeless community.

“As my husband says, ‘the fall is not that far.’ Some people are one paycheck or one illness away from being homeless and we’ve got the resources in this county to change that,” said Albarado. “Fairfax County is one of the most affluent counties in the country. Even if we have one homeless person, it’s one too many.”

One hundred percent of the funds raised for the Build a Village Campaign" will be directed to help end veteran homelessness and house homeless individuals being served through the county’s Hypothermia Prevention Program, which provides shelter during freezing temperatures. The hypothermia shelters operate from November through March and have a policy of not turning away anyone in need during freezing temperatures.

“We have been out trying to identify veterans as quickly as possible and house them within 90 days from when we identify them,” said Dean Klein, director of the Fairfax County Office to Prevent and End Homelessness. “The money we raise will provide case management, housing assistance and medical or dental resources."

“We’re trying to reduce as quickly as possible the number of people who are homeless and prevent more people from becoming homeless.”

The campaign was launched in December 2015 and Klein says they hope to reach their goal of $100,000 by the end of March. “We’re trying to reduce as quickly as possible the number of people who are homeless and prevent more people from becoming homeless,” said Klein. “This campaign will help us to reach our goals and engage as many people and companies as possible to make this happen.”

The way the program works is that local chambers of commerce, businesses, faith groups, non-profit organizations and individuals from Fairfax-Falls Church build virtual houses one brick at a time. Giving levels range from $25 for a single brick to $500 for a virtual door to $5,000 for a virtual house. The Build a Village campaign will run through March 2016.

“It is an issue that the business community feels offers an important opportunity to assist,” said Jim Corcoran, president and CEO of the Northern Virginia Chamber of Commerce.

The county is on a trajectory to reach the reach the goal by the end of the month. “We’ve had very good response since our launch,” said Glynda Mayo Hall, Partnership Development manager of the Office to Prevent and End Homelessness. “Our governing board has also stepped up to their leadership.”

Albarado’s staff at Helios HR in Reston has volunteered with non-profits that offer support to the homeless like the Reston-based Embry Rucker Community Shelter, which provides emergency housing for families and single men and women. Among the volunteer efforts designed to help the homeless in Fairfax County, Helios employees assembled and delivered bagged lunches to the shelter’s residents.

Making a personal connection with those in need is a benefit that Albarado believes will resonate with her staff and one that she hopes other volunteers will experience. “It made us feel good to see and meet the people we were helping,” she said. “It’s important to build awareness, because when people are aware they are more likely to get engaged and get involved.”

Kathy Albarado cleans an apartment as a volunteer for Cornerstones, Inc. Her company, Helios HR, has joined the Fairfax County Office to Prevent and End Homelessness "Build a Village Campaign."

In addition to donating money, personal involvement with non-profit organizations like Cornerstones, Inc. in Reston which provides support for those in need of human services such as food, shelter and childcare, helps create an awareness of the extent of homelessness in the community and breaks stereotypes about homeless people.

Meeting people who were helped by the donations and volunteer efforts has had a profound effect on Natalie O’Laughlin, communications manager at Helios HR. “We’ve been able to meet the individuals who have benefited from the programs and hear their stories, which are heartwarming, and give you a better idea of who is affected,” she said.

In addition to donating to the Build a Village Campaign, Albarado hopes that community members will give of their time, which in turn, she believes, will encourage others to make financial contributions. “Volunteering with these non-profits is more effective than reading stats because people don’t connect with statistics,“ she said. “But when you meet the people who are impacted by your work, it’s really powerful.”

To contribute, visit http://www.fairfaxcounty.gov/homeless/ and click on Build a Village.