Goal to end homelessness in Fairfax County by 2018 looms; more than 400 children are among the homeless here. 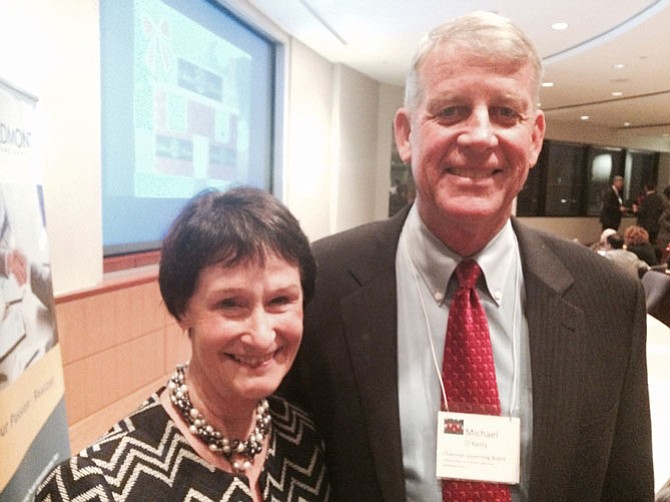 Board of Supervisors Chairman Sharon Bulova with Michael L. O’Reilly, chairman of the Governing Board, Fairfax County Office to End and Prevent Homelessness. Photo by Mary Kimm.

Dozens of business leaders, elected officials and advocates for ending homelessness gathered Monday, Dec. 14 in the offices of Piedmont Fund Services in Herndon to launch the “Build a Village” campaign.

The effort is designed to provide funds to help end homelessness in Fairfax County. Businesses pledged more than $20,000 at the event just to begin. Jim Corcoran, president and CEO of the Fairfax County Chamber of Commerce, Don Owens of Griffin-Owens Insurance in Herndon, John Sekas of Sekas Homes in Vienna and Kathy Albarado, CEO of Helios HR in Reston, each pledged $5,000.

Albarado shared her personal story, which included periods of homelessness when she was growing up as her mother fled domestic violence.

The Build a Village concept, which graphically builds houses with donations starting at one brick for $25, a window or chimney for $250, $500 to build the front door and $5,000 completing a house, is the brainchild of the Dulles Regional Chamber of Commerce and its president Eileen Curtis, who was on hand for the kickoff. Apple Federal Credit Union will manage donations.

In 2015, about 1,200 people were homeless, including 431 children. More than 60 percent of the homeless adults in families were employed, but their jobs didn’t pay them enough to afford housing. Domestic violence was the cause of homelessness for more than 40 percent of the adults in families who are homeless. Of the 488 single individuals who were homeless, 52 were 18-24 years old; 123 were 55 years old or older. Two hundred sixty-eight homeless individuals were dealing with serious mental illness and/or substance abuse.

Lack of affordable housing is the main cause of homelessness in Fairfax County, according to the Fairfax County Office to Prevent and End Homelessness. Low incomes and expensive housing make it impossible to pay for an apartment when earning minimum wage — even working 24 hours per day, seven days a week. Monthly rent for a two-bedroom apartment is at least $1,500, meaning a family would need an annual income of $58,760 to afford a two-bedroom apartment.

To donate, go to www.fairfaxcounty.gov/homeless and click on “Build a Village” campaign.