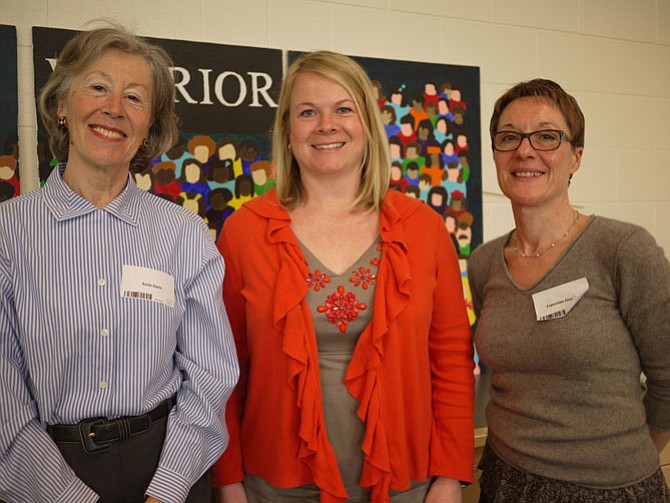 Katy Wheelock is the kind of French teacher everyone wants in high school — the kind that makes learning a language a little more like going on a magical voyage, and a little less like memorizing verb tenses. She gets students to put on Senegalese clothes, push the desks to the side, wash their hands, sit on the floor, and enjoy a meal of poulet yassa, eaten with their hands around the bowl, Skyping simultaneously with a Senegalese family to answer questions about the meal … in French, of course.

Last week, Wakefield High School Principal Dr. Chris Willmore and Wheelock, chair of the World Languages Department at Wakefield, welcomed Françoise Fauquembergue Duvivier, an English teacher at the Lycée Chanzy in Charleville-Mézières, for a visit to continue work on the partnership that Wheelock established several years ago. The exchange between the two teachers and their schools takes place thanks to the Memorandum of Understanding between the Virginia Department of Education and the Académie de Reims, a region in the Champagne-Ardennes area of France.

Susan Haley (left), a French teacher at Wakefield with Francoise Duvivier, an English teacher at the Lycée Chanzy in Charleville-Mézières.

Duvivier said the exchanges of students in both directions has been the most important aspect of the shared program. “It is one thing to see people over an internet connection.” she said, “but real communication between people, when it happens in person, is the most important thing about learning a language and then using it.”

Duvivier had just spent an hour with Wakefield students: she said she was not too surprised by their questions, but she was a little surprised at the intensity of the discussion about the upcoming presidential election in the U.S. Students at Wakefield were amazed that French students don’t have to pay for university if they get in and can’t afford the fees. Wakefield students felt French students had much more freedom than they do. Duvivier noted that language study is an important part of the curriculum in France: all students take English throughout their schooling, and can study a second language if they want. Some learn as many as four languages by the time they graduate.

Although World Languages are not currently considered a “core” subject in Arlington, increasing research suggesting language study has cognitive benefits and improves students’ outcomes in many ways, may shift the trend to making languages more essential in the curriculum. In addition, becoming bilingual is now viewed as one of the potential ways to stave off dementia and improve stroke recovery, according to current research. Virginia is one of 15 states to offer students the chance to earn a State Seal of Biliteracy in English and another language.

Arlington Public Schools have enjoyed a travelling exchange between four APS high schools and the Lycée Chagall in Reims since 2001. Once co-sponsored by APS and Sister Cities, it is now only sponsored by the Sister City Association after the Superintendent of Schools in Arlington decided APS could no longer sponsor foreign travel for its students due to liability concerns. The Arlington-Reims Sister City Association, under the leadership of Anne-Marie Daris, has worked to make those exchanges possible.

But Wakefield students can thank Wheelock for their participation in this current international project: when the email went out to APS schools to see if they were interested in connecting with a foreign school, both Wheelock and Duvivier were the teachers who jumped at the chance to bring their respective language students out of the classroom and into the world of the language they were studying. Since January 2014, a Memorandum of Understanding between the Virginia Department of Education and the Academie de Reims specifically paired Wakefield High with Lycée Chanzy.

One of the reasons for the program’s success is the leadership at Wakefield: Willmore has been an advocate of the program, particularly since he recalled his own exposure to language, when there was a dynamic language program which included student exchanges in Costa Rica. Willmore said that the time he and fellow students spent in Costa Rica, no matter how volatile the environment or how many mistakes they made, was important in giving students the confidence to operate in a foreign environment without fear.

On Friday, following lunch, Wheelock and Duvivier were invited to the Embassy of France to meet with Embassy of France Education Attaché, Head of Educational Affairs Department Karl Cogard and Program Officer Educational Affairs Céline Jobé. They discussed how the Memorandum of Understanding was working, and the two teachers’ hopes for the future. The Embassy offered professional development for the teachers, as well as pedagogical resources like short films, animated shorts, and popular music with teaching guides, for use in class.

Wheelock has been teaching French at Wakefield High School for seven years. The French Department at Wakefield earned the designation of Exemplary Program, with Honors, for 2015-2017, one of 10 in the nation, through the American Association Teachers of French.

For further information on Wakefield’s program, on the Arlington-Reims Sister City Association, and on the value of learning a foreign language, see www.frenchteachers.org/hq/exemplaryprogram.pdf, www.actfl.org and www.arlingtonsistercity.com.

When Katy Wheelock began teaching at Wakefield, there were seven sections of French. By the time she received the Exemplary French Program award, there were nine. Wakefield also began offering two additional higher level classes, French 5 (a pre-AP class) and Advanced Studies of French (a post-AP class which APS is hoping to offer as a dually-enrolled class in the future).

Under her leadership, Wakefield:

Wheelock said she hopes to be able to visit middle school French teachers and students in level 1, at least once per year, to encourage more students to continue to level 2. She would like to see more students go on to language in high school and would like to see world languages become a core subject, as it is all throughout Europe. Wheelock also hopes to establish a stronger “college link” to show students the college opportunities for language study, how successful completion of advanced classes can earn college credits, how language can lead to studying abroad, internships, and and eventually, job opportunities.