VDOT’s Transform I-66 Inside the Beltway meeting leaves public waiting for answers.

At the table were Todd Horsley from the Virginia Department of Rail and Public Transportation, Nick Nicholson of the I-66 Team, and Renee Hamilton, VDOT deputy district administrator. Amanda Baxter, VDOT special projects manager stands behind the lectern. Photo by Andrea Worker.

Robert Bear of the Fair Lakes area looks for answers to his questions and concerns on the proposed improvements to I-66 inside the Beltway at the VDOT Public Hearing. After the session, Bear admitted that he felt he was going home with more questions than answers, despite the helpful attitude of the VDOT representatives he encountered.

The Virginia Department of Transportation (VDOT) and its partner, the Virginia Department of Rail and Public Transportation, hosted the third and final Design Public Hearing on their plans to improve I-66 inside the Beltway by the addition of another lane of traffic and by the conversion of the road to a completely tolled thoroughfare during peak morning and evening travel hours.

The meeting, postponed from January when Storm Jonas came to town, was held on Wednesday, March 9, at VDOT’s Northern Virginia District headquarters in Fairfax, but despite the lengthy delay imposed by mother nature, some of the audience members left with the feeling that they were being asked to wait even longer for answers to their questions and concerns.

“By the time we get the answers,” said Robert Bear, a resident from the Fair Lakes area, “they will have already awarded their contracts and the work will be underway.”

AFTER MAKING THE PRESENTATION on the project’s current status, Amanda Baxter, VDOT special projects manager who was helming the podium, did announce that the evening’s proceedings would not take a “dialogue format” but that “team technicians would be available to respond to comments and questions.”

When adding her concerns about overspill traffic from motorists seeking to avoid I-66 and the tolls into the public record, Ginger Harrison of Arlington asked for clarification of that response period. “I am a bit confused about the format,” she asked. “Will we not get answers to any of our questions or be able to generate any comments this evening?”

Baxter reiterated that the agenda was to receive comments, then there would be time remaining for technical experts to respond. “So we will get answers this evening. That’s helpful, thank you,” said Harrison.

Some of the speakers and others in attendance seemed taken aback then, when Baxter concluded the meeting after the last official comments and invited the assembly to move out into the hallway where presentation boards were on display, manned by project representatives.

When it seemed that there wasn’t a rush to accept this invitation, Fairfax County Board of Supervisors Chairman Sharon Bulova asked, “At what point will these comments and questions be addressed?”

Baxter replied that comments would be welcomed from the public through March 24 and that VDOT expected to have responses available by the end of April.

“So, you’re not going to have some response tonight?” asked Bulova.

“No,” responded Baxter, adding that the format for the Design Meetings has been to accept comments and then allow for interaction individually with the technicians and for examination and explanations of the project materials. Further inquiry from Bulova did result in the announcement by Baxter that there would be published responses via the Transform I-66 Inside the Beltway website and other sources.

So, what were some of those comments and questions that were left, at least temporarily, unanswered?

SEVERAL OF THE SPEAKERS questioned why the “transformed” I-66 would require an E-Z Pass or E-Z Pass Flex transponder to pay the toll. Fran Taylor of Falls Church cited examples of other jurisdictions around the country and in other parts of world that had alternative tolling methods. “The technology exists,” she said. “Some places, you can call in, go online, or even use a machine at a gas station to pay within 24 hours of using the toll road. Why can’t we do that?”

Jeff Barnes agreed, expressing concern for what would happen to those who get on the toll road following maps or GPS instructions “like tourists and other visitors, or people travelling to and from the airport.” He said that these drivers were “valued guests, not the ‘violators’ that VDOT is calling them. This is not a good philosophy for Virginia.”

Barnes also added his voice to Harrison’s and several others who are unconvinced that “secondary” and connecting roads would not be negatively impacted, especially when the “free ride” for two or more passengers per vehicle changes to three or more in 2020. Barnes asked to see what studies had been done and what percentage of drivers VDOT expected would discontinue using the toll road under those requirements and return to the secondary routes.

Bear, too, worries that when the already-crowded secondary routes receive the additional traffic from drivers avoiding the tolls, “You’ll never get out” of those neighborhoods. “Has anyone who wrote these plans ever used these roads?” he asked. 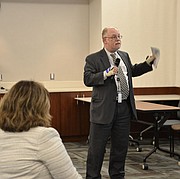 Jeff Parnes has a lot of concerns about the proposed design of the “transformed” I-66, including the fact that there does not seem to be any connection points to the area’s growing number of “Hot Lanes.” Parnes foresees problems when drivers enter the system not knowing that they can’t travel straight through from highway-to-highway via the tolled lanes, but must transfer with the attendant exiting and re-entering.

There were also questions and comments of a financial nature. Rob Whitfield with the Fairfax County Taxpayers Alliance attends most of the transportation-related meetings in the region. He called the decision to only toll in one direction “a discriminatory plan.” He also has reservations about the appointment by resolution of the Northern Virginia Transportation Commission (NVTC) to be the body that will handle the net toll revenue and distribute the funds for approved projects along the I-66 corridor. “The NVTC is unfit to govern this process or these funds,” he said, believing that the Northern Virginia Transportation Authority would be better suited and also includes members from affected jurisdictions that are not represented on the NVTC.

Questions were also posed about noise and environmental impacts that had yet to be addressed in materials currently available on the website.

Eventually, many from the audience did leave the meeting room and engage with the technical team, all of whom seemed eager to assist, even shepherding some of the questioners to other team members with expertise in particular areas of interest or concern. “They were really pleasant and seemed to want to help,” said Bear, “but I heard a lot of ‘it’s because of this jurisdiction, or that politician or that regulation or this study.’ Honestly, I am leaving here with more questions and concerns than when I got here. I guess I’ll just have to wait.”

The website www.insidetransform66.org contains all of the materials presented at the meeting, as well as full plans for the project and many of the studies that have already been done. Comments and questions can also be submitted on the site by the March 24 deadline. Construction of the tolling gantries is expected to begin in 2017, with tolling operational by 2018.