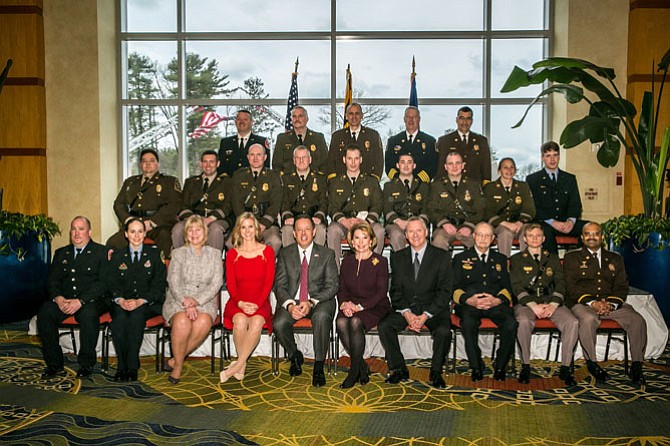 The Montgomery County Chamber of Commerce brought nearly 1,300 business, government, and public safety leaders together at the 42nd Annual MCCC Public Safety Awards Luncheon on March 11 to thank the men and women who protect the community.

During the ceremony, the stories of the heroic acts by the 12 Valor Award recipients were shared by emcees Tom Costello, NBC News Correspondent, and Melissa Mollet, NBC News4 Traffic Reporter:

Attendees also took a moment of the ceremony to make a line of duty death tribute to Police Officer Noah Leotta who is among the fallen officers memorialized at the Montgomery County Public Safety Memorial in Gaithersburg after being struck by a drunk driver near the intersection of Rockville Pike and Edmonston Drive.

The National Institute of Standards and Technology (NIST) received the Public Safety Government Partner of the Year award, sponsored by Motorola Solutions, for being a federal public safety partner as an advocate for the research and training of the fire and rescue service and law enforcement communities.

The Annual MCCC Public Safety Awards is the largest of its kind in the region. Forty-two years ago, the MCCC was chartered by Montgomery County to host an annual event where the community, colleagues, families, citizens and officials could honor first responders from the public safety agencies. Since the event began, MCCC has recognized 39 Gold, 134 Silver, 232 Bronze, and 174 Honorable Mentions for a total of 579 Valor Awards.