Herndon’s ‘Coffee with a Cop’
Votes

Herndon’s ‘Coffee with a Cop’ 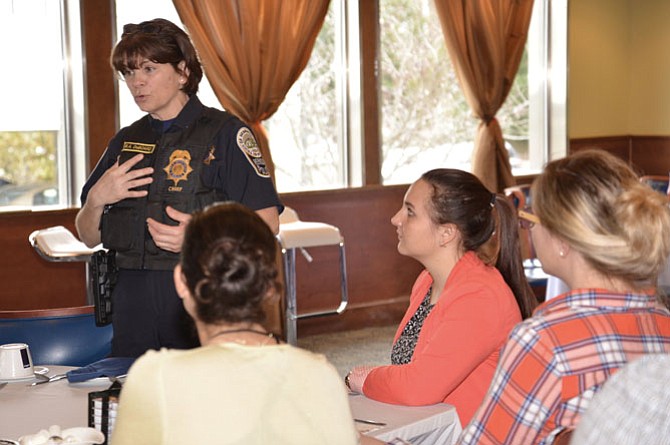 Herndon Police Chief Maggie DeBoard talks with residents at the “Coffee with a Cop” event. DeBoard was appointed to a Steering Committee to help clear up a backlog of untested forensic kits from victims of sexual assault throughout the Commonwealth. Photo by Andrea Worker. 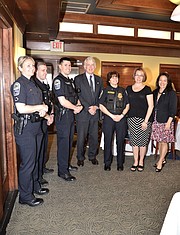 Herndon residents Eleanor Benedict, Mary Lou Ferreira and Jeff French enjoy the coffee and pastries provided by host venue Amphora Diner Deluxe as they prepare to listen to remarks by Virginia Attorney General Mark Herring and others during the “Coffee with a Cop” event.

No doubt the safest place you could have been anywhere near Herndon on Friday morning was in the private dining room at Amphora’s Diner Deluxe on Elden Street. In addition to a number of Herndon residents and Amphora management and staff, the room was also occupied by Mark Herring, the Attorney General of the Commonwealth of Virginia, Lisa Merkel, Mayor of Herndon, and Chief of the Herndon Police force Maggie DeBoard, along with several of the jurisdiction’s men and women in blue.

Billed as Herndon’s “Coffee with a Cop,” the event was the last stop on the Herring’s 2016 Public Safety Tour, a public outreach that Herring has been conducting since taking office in 2014 that sees him crisscross the state meeting with law enforcement, local authorities and the citizens of those locales. “It’s really important to see and hear first hand from our citizens and those on the front lines of public safety,” said Herring.

What are some of the common themes that have been noted during the meetings? “Simply put, our citizens ask that we make our communities better and safer.” Of course, recent events like the shooting death of Michael Brown by police in Ferguson, Mo. and, closer to home, the death of Freddie Gray in Baltimore while in police custody – and the subsequent rioting and unrest in both places and across the country - have trained a spotlight on the relationship between police and the communities they serve.

“Community relations are key,” acknowledged Herring, adding that his office was preparing several initiatives – and partnering with other agencies and jurisdictions – aimed at improving those relations and “increasing citizen engagement” so that police and the community can work together to achieve the goal of better and safer communities. “Neither can do it alone. Not law enforcement. Not the public. They both need to be actively involved,” he added.

HERNDON CHIEF OF POLICE DeBoard described some of the community outreach programs that the Herndon Police employ, like their elementary and middle school programs to begin building trust from the youngest age. Plans are afoot to host youth soccer games where “kids and their parents can see cops as people and interact in a positive environment.”

One area that the Attorney General’s office will address is recruitment of more minorities for law enforcement positions. Chief DeBoard spoke to this need, as well. “It’s one of my biggest frustrations,” she admitted. “We don’t have enough of a connection with our large Hispanic community. We do need more personnel from that background, and to find ways to better connect and break down the barriers.” DeBoard believes that the exchange of information between police and this sector of their citizenry needs to be significantly increased, to improve the force’s effectiveness and make the community “safer for all of us.”

Herring and staff are currently working with smaller jurisdictions to develop minority-focused recruitment efforts and will make their findings and proposals available as the efforts progress.

Another essential in improving community relations and law enforcement effectiveness is training, according to Herring, and it’s something that he believes is lacking, often due to budgetary constraints. Again, he is working with small and medium-sized communities to develop regional train-the-trainer programs that can be disseminated to the front lines with less expense. The curriculum will include “21st-century policing methods and strategies like de-escalation tactics and implicit bias. Bias is something we all have and we must be trained to avoid in our police work.” In addition to in-service training, Herring and his colleagues will be working on updating the training of recruits at the academy level to “get our newest officers off on the right foot.”

The sharp rise in deaths from heroin and prescription drug overdoses in the last several years also came up during the forum. “This is not an isolated “ghetto” problem,” declared Chief DeBoard. “It’s an epidemic across all sectors of our community.” Herring agreed, sharing that it was a topic at every meeting throughout the Commonwealth where members of the audience expressed their concerns and spoke about personal experiences. “There were 728 deaths from heroin or prescription overdoses last year. More than in car accidents. And way too often the heroin fatalities started as a person’s usage of prescribed painkillers for legitimate ailments.”

Herring and DeBoard both spoke to the sometimes deadly relationship between heroin and prescription painkillers and called for everyone to educate themselves and to be vigilant about any signs of abuse. Herring was pleased to announce that his office had prosecuted 28 cases involving 90 or more kilos of heroin (“We’re are going after the suppliers, the major players,” he said) but cautioned that “we are not going to arrest our way out of this problem.”

Senior Police Officer Denise Randles, Capt. N.R. Thunman and Mayor Lisa Merkel were all on hand for the “Coffee with a Cop” community outreach gathering.

Describing the effort to curb heroin and prescription drug death as truly bipartisan in the Virginia Legislature, Herring outlined a few of the primary initiatives, other than dealer and major distributor prosecution. He noted the passage of a “Safe Reporting Law,” so companions of overdosing persons will not be afraid to call for help for fear of arrest for possession, and making opioid-blocking drugs like Naloxone more widely available to law enforcement and emergency responders. Herring also announced that his office had just released “a cutting edge documentary” on the subject and urged the community to “find as many ways to screen it as possible.” The 44-minute video, entitled “Heroin: The Hardest Hit” is available on the Attorney General’s website at www.ag.virginia.gov, on YouTube and as a free DVD upon request.

WITH THE PRESENTATION COMPLETE, Herring, DeBoard, Merkel and the other law enforcement personnel spent time visiting with attendees, answering questions and listening to suggestions and concerns. Before Herring’s departure, the locals made sure to invite their “Top Cop” back to participate in Herndon’s always well-attended National Night Out extravaganza, a real highlight of the Herndon community relations calendar.