Food Trucks are the Kitchen at Local Breweries
Votes

Food Trucks are the Kitchen at Local Breweries 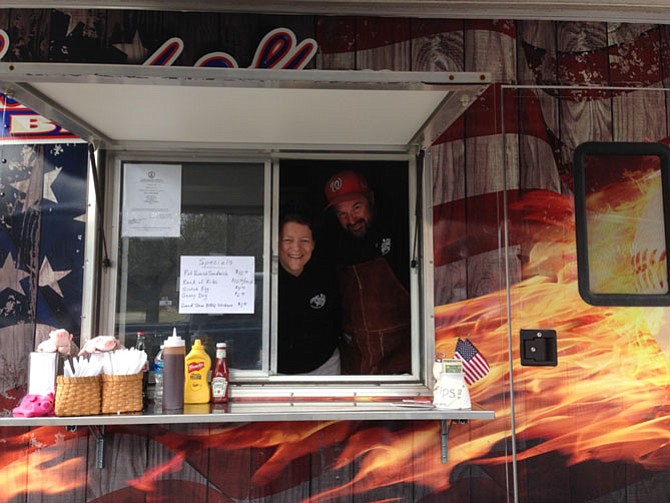 Gina Bucholz is comfortable behind the bar serving craft brews while the Rocklands truck out front deals with the food.

At Port City Brewing in the western Alexandria, the “pearl,” a layered dish of macaroni and cheese, baked beans and barbecue meat, is downed with a micro beer so it’s known to bring on a “food coma” of sorts. Port City is one of the many microbreweries that serve no food but rely on independent food trucks that pull up outside for their food source. The pearl is the creation of Rocklands Barbeque and Grilling Company, one of the trucks known around the circuit.

“They layer it in a bowl, it’s fantastic,” said Gina Buchholz, a Port City manager. “After eating it, you need a nap but it’s totally worth it,” she said.

FOOD TRUCKS serving microbrewery customers are a work-around that fits the bill at many microbreweries across the area though. Ever since the Virginia legislators passed State Bill 604 in May 2012, saying “tastings” were allowed at breweries, the number of breweries across the state multiplied. And people drinking beer need food, and that’s where the food trucks come in, like Rocklands that makes regular stops at Port City.

“I think people appreciate having that as an option,” Bucholz said.

Alexandria resident Derek Fargino. a Rocklands driver, said the menu “depends on what goes well with beer, we mix it up.” Chadwick Kanney, a student from Roanoke, split a Rockland’s pork sandwich and beef brisket with her boyfriend. “We like to hit all the breweries around here,” she said.

Julie Drews, manager of the Brew Shop in Arlington, loves the food truck convenience when she’s sipping on “craft brew,” as it’s known. The Brew Shop sells craft beer and homebrewing supplies so Drews has her finger on the pulse of the local brew scene. “It’s a cool thing, they don’t have to have a kitchen and deal with all that,” she said.

According to Jennifer Guild, public relations Specialist at Virginia Alcoholic Beverages Control, SB 604 was a big deal. "Senator Jeffrey McWaters sponsored Senate Bill 604, which added additional privileges to the brewery license. Brewers formerly were required to obtain a second license to sell beer for off-premises consumption, and they had to obtain a restaurant license in order to sell beer for on-premises consumption. Under the new law, brewers are able to operate more like a Virginia farm winery, with on- and off-premises sales privileges combined into the brewery license," she said, responding by email.

According to Guild, there is no food requirement to hold a brewery license. “More and more breweries take it upon themselves to invite food trucks and outside food delivery to their facility on higher traffic days,” she said.

Both the food trucks and breweries benefit from this arrangement, says Jeff Maisey, publisher/editor Virginia Craft Beer Magazine, a monthly publication for the brew crafters in the area.

“Breweries want to brew and serve beer to their consumers without the hassle and expense of operating a kitchen/restaurant and food trucks have a captive audience at breweries as patrons get hungry” he said in an email.

Although legitimate restaurants and food trucks have had disputes before, “most breweries are in industrial areas not directly near an established restaurant,” said Maisey. This is true with Port City, which is located in warehouse area off the beaten path. “The breweries in downtown areas make the inclusion of food truck service less likely -- as it should be,” said Maisey.

Arlington’s newest microbrewery, New District Brewing Company, does have a relationship with a nearby food truck vendor, which parks in front of the brewery when it's open. So far, the arrangement is working.

Localities have adopted rules on the trucks as well. In Alexandria, the City Council adopted regulations last May that allow food truck vending in certain off-street locations, including private property, public property and farmer’s markets, with the permission of the property owners. The demand for the additional food choices provided by food trucks was part of their decision. In August 2015, Arlington launched a pilot program in Rosslyn for food trucks that creates four exclusive zones where vendors can offer restricted curbside lunch spots without having to compete for parking space with other vehicles, similar to an outdoor food court. In Arlington, the designated spots will be active weekdays from 10 a.m. to 2 p.m., giving vendors at least two hours more than they are usually allowed in traditional parking spaces. The program is designed to create pedestrian-friendly food truck access for area workers and residents and the participation is voluntary, meaning food trucks can park in other areas of Rosslyn and the County, provided owners observe the parking rules for those streets.

ROCKLANDS DRIVER Derek Farino stops at the New District Brewing Company, as well, and even though it’s frequented by other food trucks, there’s plenty of business to go around. “We’re good friends with the other trucks,” he said. The Urban Bumpkin BBQ is one of the food truck competitors that specializes in handmade fried dough "native/Indian frybread" topped with a variety of ethnic treats cooked to order on the truck with wonton wraps. The food truck menus don’t really resemble a health food diet, but then again, it’s brewery food we’re talking about. They are part of the food truck community, according to Urban Bumpkin BBQ official John Nguyen. “The breweries have a rotation of different trucks for variety,” he said.

Neil Pappalardo drives his Grand Slam BBQ truck from Manassas to the parking lot of the Fair Winds brewery in Lorton where their big seller is the “Scotch Eggs,” a hard boiled egg wrapped in sausage. “I cannot make them fast enough,” he said, noting that the brisket and pot roast sandwiches do well at Fair Winds, as well. His truck also visits the Vint Hill area in Warrenton.