Potomac: In the Kitchen with Terri
Votes

Potomac: In the Kitchen with Terri 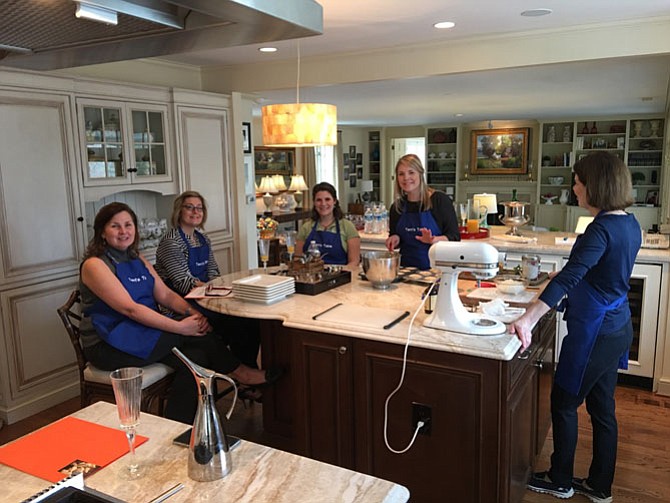 Creamy gruyere cheese flows through a box grater followed by long shards of russet potatoes. Both are piled on a platter. The potatoes gain a deep crunch after sizzling in hot oil, the cheese melts on top of the potato crust and the concoction is topped with grassy, deeply green asparagus. Such is the beginning of an asparagus frittata at Terri's Table.

“With fresh ingredients and a few techniques you can have a nice, seasonal meal and it won’t take an entire day to make,” said Terri Carr, the founder and proprietor of Terri's Table, a cooking school that Carr runs out of her Potomac home. 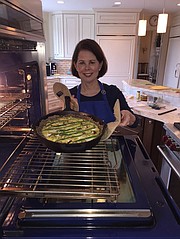 Terri Carr pulls an asparagus frittata out of the oven.

For Carr, time spent in the kitchen is less about employing complex gastronomy skills in search of culinary excellence, and more about using fresh seasonal ingredients to create elegant, boldly flavored dishes with minimal fuss. During her classes, she teaches that healthy fare with complex tastes can be accessible to anyone, and that time spent in the kitchen is about creating memories and enjoying the company of friends.

"I'm not training people to be chefs," said Carr. "I want them to be good home cooks.”

In order to understand the philosophy on which her cooking school is based, one must first understand the origins of her culinary love affair. It didn’t begin in a food-oriented family or at the hands of a doting grandmother with an arsenal of treasured recipes.

“When I went out on my own, I didn’t even know how to make coffee,” said Carr.

It was an encounter with a woman she simply calls “Helen” that lead to weekly cooking classes in Los Angeles, where Carr and friends would gather in the kitchen of Helen’s cottage. They learned to whirl, saute and braise simple ingredients, transforming them into dishes full of nuanced flavors.

"Much of what we did was French cooking, and I still use her recipes,” said Carr, who has taken cooking classes in Italy and France as well as locally at L'Academie de Cuisine.

Carr now uses that model as she invites groups of students into her light-filled Potomac kitchen, an expansive space that she remodeled and updated with professional grade appliances, such as a Wolf cooktop and a Sub-Zero refrigerator.

Appertifs like roasted, salted almonds and mimosas await students arriving for a lesson in Carr's kitchen. Her classes are themed and coordinated with the seasons. She's revealed the magic of creating fragrant and herbaceous lamb for Easter or moist and flavorful turkey at Thanksgiving. Carr is now in the midst of showing students how to cook with the bounty of spring: think creamy rissoto with asparagus and green peas.

"She’s very adept at interspersing special techniques and interesting stories about the food that we’re cooking," said Martha Corvell, who has taken several classes from Carr and plans to celebrate her birthday with another lesson for herself and a group of friends. "She's a great hostess, and she has one of the most lovely homes and it's warm and inviting."

Covell is not a not a novice in the kitchen, but finds a wealth of knowledge at Carr's hands. "I take her classes, not because I don‘t know how to cook, but because you always learn new techniques," said Covell. "In each class there are people with different skill levels, but you always learn something."

Along her culinary journey, Carr gave her son a childhood of savory memories.

"My fondest experiences in my life typically revolve around being in the kitchen with my mother," said Nick Phelps, Carr's son, who founded From the Farmer, a company offering home delivery of fresh seasonal produce. “It's been a fun part of my life and has driven me to care so much and be so passionate about food."

Even when he returned home from college, Phelps, now 29, said, familiar food aromas always welcomed him home. "Every time I came home after being away at college,” he said. “The first thing I noticed when I walked in was the smell of roasted chicken with roasted root vegetables — it’s my comfort food, my soul food, if you will," said Nick. "I know I’m home when I can smell the roast chicken."