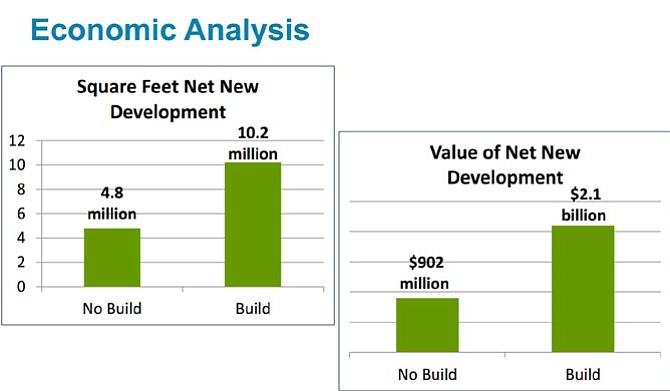 Economic analysis of the Transitway’s impact on the Beauregard Corridor. Photo Contributed 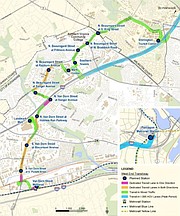 “I just want to make sure we don’t wake up one day and find all the trees gone.”

If all goes as planned, implementation is still four years away, but the West End Transitway took a step forward at the March 29 meeting with the City Council unanimously voting in support of guidance for the planning of a Bus Rapid Transit (BRT) route between the Van Dorn Metro Station and the Pentagon.

The $140 million project will include bus-only lanes, stations that include real time bus information, and improvements to the safety of the nearby sidewalks. The city plans utilize the BRT implemented on Route 1 in 2014 as a template, with the possibility of the service expanding into a streetcar at a future date.

While the City Council expressed hope that the improvements might also fix traffic problems at various West End sites along the BRT route, Yon Lambert, director of Transportation and Environmental Services, said that the project focuses specifically on BRT.

But it was conservation, not financing or transit, that dominated most of the conversation on the project — specifically, whether language in the guidance should call for a “tree canopy” or “canopy trees.”

Councilwoman Del Pepper and Mayor Allison Silberberg expressed concern that the project would remove many of the existing trees along the Beauregard corridor and were unsatisfied with staff’s initial answer that there would be a net increase in local tree canopy. For Pepper, the primary issue was that there was no guarantee that the new trees wouldn't be entirely bunched around the Van Dorn Metro Station.

Tax revenue of new development with and without the Transitway.

“Oh Banana Oil,” Pepper said. “I want to make sure we don’t wake up one day and find all the trees gone … without trees, this turns into ordinary development.”

Lambert added that trees would be planted along the sides of the route and in the medium. For the type of tree, he said the staff would defer to the city arborist, but while Pepper seemed satisfied by the answer, Silberberg was just getting started.

Initially, Silberberg asked that staff look into uprooting and replanting the existing trees rather than wait for new saplings to grow, but Lambert answered that the type of trees in place would make that impossible. The mayor then insisted that the plans include “trees like maple and oak,” which prompted a scoff from from Vice Mayor Justin Wilson as the conversation continued to center around what type of tree would be planted.

“We’re not arborists,” said Wilson, “why are we dictating this?”

Lambert answered that it was difficult, at this stage of the process, to say for certain what types of tree would be planted. The city unanimously approved the guidance. By summer, the Transitway is expected to move into the project design phase.