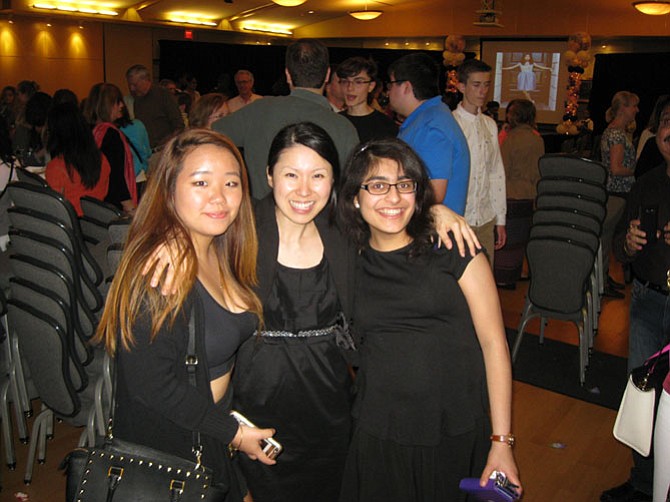 As part of the 2016 Spotlight on the Arts program, the fashion careers class at the Fairfax Academy for Communications and the Arts held its fourth annual student-designed and produced fashion show called "Fashion in Motion" at the Sherwood Center in Fairfax on Friday, May 13.

Culminating in a year's worth of effort, more than 30 models displayed fashions that were designed and hand-sewn by the students in fashion careers class taught by instructor Jin-A Chang. "It's a compilation of a lot of hard work since the beginning of the year," said Chang. "I am so proud of all of my students' hard work and accomplishments."

The show with about 300 guests featured videos of students being interviewed and talking about their inspirations in the fashion careers class, followed by models cavorting the catwalk and showing off themes created by the students, such as Memories by Marissa Vincent, Envy by Nicole Dabney, Street Art Clothing by Jalita Montgomery (inspired by artist Basquiat), Frida Kahlo by Hannah Thomas, and Creating Wearable Arts by Maia Hatchett and Fashion Design 1 students.

Jo Ormesher, executive director of Spotlight on the Arts, called the show: "Fabulous, it's fantastic. The talent in our community with the designers and the models is stunning. Everything they've learned and presented themselves was amazing."

Part of the proceeds -- about $2,500 -- goes towards the charity, Hope for Justice, which deals with human trafficking. Clara Poteet, a student in the fashion careers class in charge of public relations, added: "I am honored to be part of an event that celebrates young designers and helps prevent human trafficking."

The 29 Diner in the City of Fairfax offered a buffet of finger foods after the show, and gave a 20 percent off for customers at its diner.