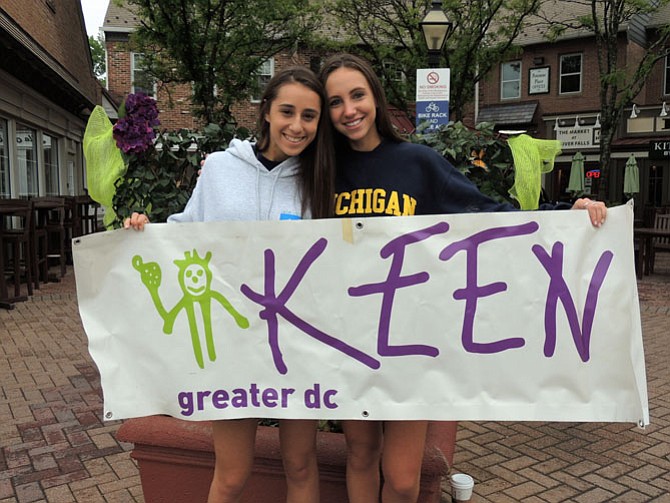 For the past two years, Bullis students Carly Morgan and Sabrina Epstein have changed the lives of numerous KEEN (Kids Enjoy Exercise Now) athletes and their parents, as well as those of many Bullis students. Sabrina and Carly founded the Bullis KEEN Club, searching for students to volunteer their time every other Sunday to meet with KEEN participants with special needs. Recruiting and selecting for the Bullis KEEN Club was difficult — but once they formed a dedicated group, the word spread about how meaningful and fun it was — and now there is a waiting list to join.

On May 20, the KEEN Club sponsored a first-ever prom for KEEN students. Carly and Sabrina wanted to leave a legacy and start a new tradition.

These two founders inspired an organization – and that organization created an evening that will remain in the hearts and memories of everyone who attended the first KEEN Prom.

Delighted KEEN athletes, in their prom dresses and tuxedos danced the night away with their Bullis friends, snapping selfies and mixing and mingling with all the youths at the event.

As KEEN parent, Melanie Wissinger noted, “This, like every teen’s prom, was a night to remember. Thanks for allowing the parents to stay and observe this monumental moment for our teens.”

Parent Mark Buckman echoed her thoughts: “We’ve enjoyed many wonderful KEEN activities over nearly 10 years, and I can say without question tonight’s KEEN Prom has been the best.”

“Last night was the best night of my life,” said Carly. “Seeing how happy all of the athletes and their parents were made all of the hard work that went into the prom so worth it. The room looked beautiful and everyone had the best time. The most memorable moment for me was seeing the Buddies dance together. I have no words to describe how I felt when I saw how dressed-up and excited all of the athletes were when they walked into the gym. Some of the girls had bought special long dresses and tiaras for the night and it was just so special. My buddy, Braeden had the best time. He told me that his younger sister was practicing his dance moves with him earlier and we danced for most of the night with all of his friends from KEEN.” 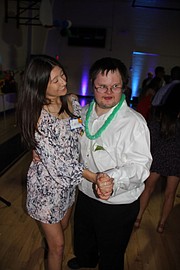 KEEN’s mission is “to empower youth with disabilities by providing free, non-competitive one-to-one programs of exercise, fitness and fun, led by volunteer coaches.” The Bullis KEEN Club provides a program which pairs KEEN athletes with Bullis volunteers. The Bullis students must go through a rigorous evaluation and selection process and only 20 are chosen. They meet twice a month with their KEEN Buddies to participate in fun activities as a group and then often, during the times when they are not meeting, they still remain in contact. They gather every other Sunday at Tilden Middle School for an hour and 15 minutes. Some of the group activities include bowling, mini-golf, tennis, basketball soccer, Karate, an outing to Glen Echo Park, going for ice cream, playing games and hanging out.

“Participating with the KEEN kids is so rewarding because of the joy that the KEEN kids get from interacting with other teens,” Sabrina said. “Even though many of the athletes are non-verbal and are sometimes non-communicative, they gain from knowing that someone wants to be with them and cares. Their parents are also pleased that their child has a friend to interact with.”

Carly wrote her college essay about her KEEN experiences and how volunteering with her buddy Braeden had changed her life. She wrote: “On this particular evening, the chairman of KEEN gave a keynote speech that explained why he is so dedicated to the organization. He spoke about a young man with dramatic learning disabilities that is overtly (although unwillingly) violent and has a tendency to hurt both himself and those around him. He mentioned that earlier in the evening he had been speaking to the young man’s mother who relayed an interesting story. Apparently, for the first time ever this young man had asked his parents if he could go to church. They looked at each other, puzzled. He had never asked to go to church before. It is difficult for him to sit through given his attention issues. He simply can’t sit still that long. When they asked him why he wanted to go to church, he said because I want to thank God for KEEN. I want to thank God for my friend. It’s difficult to describe how this moment made me feel. I don’t do KEEN for my résumé. I don’t do it because I have a community service quota. I do it because I’m making a difference. Still, for Braeden, I am KEEN. He spends the majority of his time on Sundays with me. To know that another person on this planet felt that strongly about me was humbling to say the least. The moment felt truly special, for both of us.”

KEEN Club members all helped to organize and plan the event. DJ DAaron Anderson donated his services, Bullis donated the facility, cupcakes from Cupcakes by Premila were donated by Plants, Etc and students from Bullis brought in bow-ties and costume jewelry for the KEEN students to wear. All the KEEN kids received a prom t-shirt and a beach bag with sunglasses and other gifts. Every KEEN student was accompanied a parent or guardian.

Both Sabrina and Carly are seniors and will attend Michigan next fall. Sabrina attended the prom with her buddy Michelle. She said, “We have become such good friends and had so much fun dancing together. All the KEEN kids enjoyed an arts and crafts area that we set up for them.” Both Sabrina and Carly were honored at the KEENFEST Gala in November as the Volunteers of the Year.

Even though Sabrina and Carly will be at college, they have already lined up students who are as passionate as they are about KEEN to run the organization and make certain the KEEN Prom becomes a yearly tradition at Bullis.