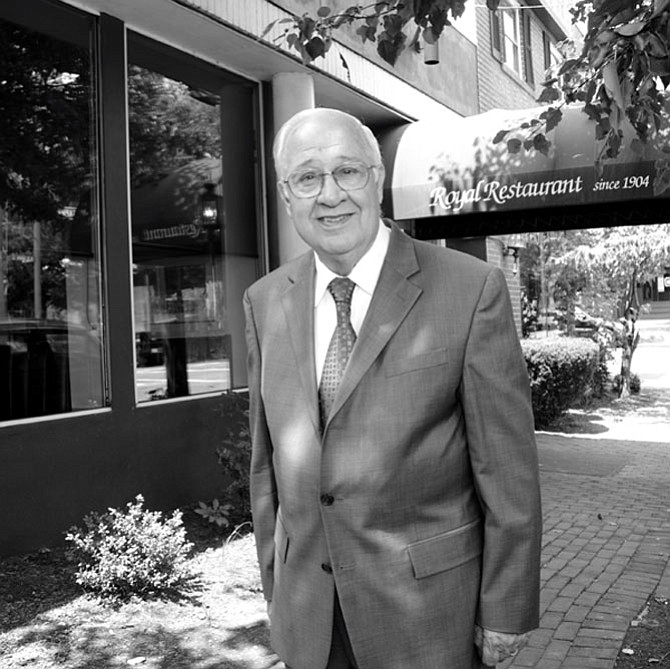 Charlie Euripides, a Korean War veteran and owner of the Royal Restaurant, will be honored with the Distinguished Patriot Award Nov. 10 at the Chamber of Commerce Salute to Veterans breakfast at Mount Vernon Estate. Photo by Nina Tisara

Alexandria — Charlie Euripides, a Korean War Veteran and longtime owner of the Royal Restaurant, will be presented with the Distinguished Patriot Award Nov. 10 at the Alexandria Chamber of Commerce annual Salute to Veterans reception.

Euripides served in the U.S. Navy from 1954-1957. He served two years aboard the Battleship New Jersey in the Gunnery Division followed by two years with the 6th Fleet aboard the Flagship Salem. Euripides was part of the special services unit where he translated messages from the Greek Coast Guard, Navy and Air Force.  His translations included everything from high level messages from the Greek Government to notifications about World War II mines still floating in the Mediterranean.

Following his military service, Euripides returned to The Royal Restaurant in Alexandria, where he had worked as a teenager after leaving Cypress in the 1950s. Owned by his uncles, Euripides eventually took over the restaurant and for decades has supported hundreds of local charities, always saying, “I wish I could do more.”

The event, sponsored by Cotton & Company, will take place at Mount Vernon Estate beginning at 8 a.m. and will feature Barbara Carson as the keynote speaker. Carson is the associate administrator for the Office of Veterans Business Development with the U.S. Small Business Administration.

Other businesses being honored include: the Animal Welfare League of Alexandria, which employs two fulltime veterans with an additional 15 veterans serving on AWLA’s volunteer team; @home real estate, co-owned by a Bob Hall, a retired three-star General JAG officer of the Air Force, and his wife Karen, daughter of a Navy veteran; Mr. Handyman of Northern Virginia, owned by retired Navy Aircraft Maintenance Officer Jo McCabe and provider of volunteer services to veterans in need; and Sonoma Cellar, owned by Capt. Rick Myllenbeck, now in his 40th year of unbroken service with the U.S. Navy and Navy Reserve.

For more information or to purchase tickets, including military discount tickets, visit www.alexchamber.com.