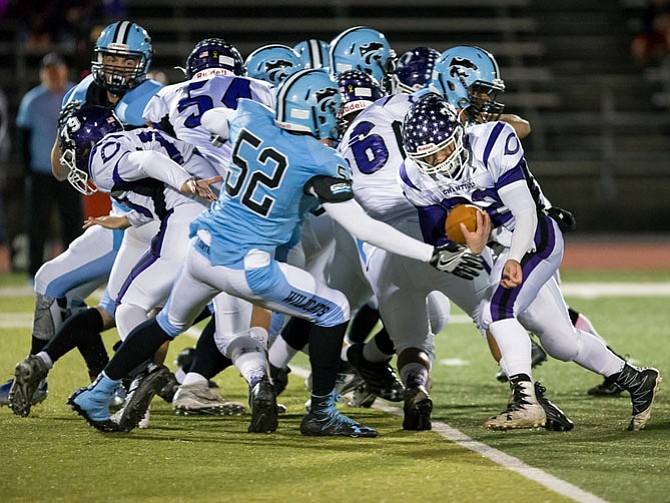 Centreville — When Chantilly and Centreville met on Friday night, Oct. 28, playoff implications were at stake. After consecutive wins at Mclean and Oakton, Chantilly came into game losing last week’s game with Briar Woods 42-3. Centreville defeated Oakton and Herndon before being handled by Westfield, 35-0.

Just a minute and a half into the game, Centreville’s Deonte Edmonds burst 53 yards to the end zone to take a 7-0 lead. Edmonds was not finished. On the first play of the 2nd quarter Edmonds would score his second touchdown on a 2-yard run.

Chantilly would get on the board with 9:04 to play in the 2nd quarter when Mark Harper ran in from 5 yards out to pull the Chargers closer, 14-7. A little over two minutes later Centreville’s Julian Garrett would be on the receiving end of QB Jameel Siler’s pass and take it 37 yards for the score. Centreville still had more. This time Siler ran in from 1 yard out and the Wildcats were up 28-7 at the half.

Centreville would start the second half even faster getting in the end zone with only 28 seconds elapsed, as Julian Garrett burst 46 yards for a Wildcat touchdown. Trailing 35-7, the Chargers still had fight in them. After catching a pass and bursting towards the end zone, Corey Thomas dove and extended the ball over the pylon with 6:23 to play in the 3rd.

Centreville,  still up 35-14, again responded when Julian Garrett scored his 3rd touchdown of the game on a 1-yard run with 2:27 in the 3rd. Little more than a minute later Chantilly’s Justin Holl hit Corey Thomas again, this time for a 68 yard touchdown and the Chargers last score, cutting the lead to 42-21 with 1:21 in the 3rd.

In the 4th quarter Centreville’s Isaiah Culver scored the game’s final points when he ran in from 25 yards and Centreville would close the door on Chantilly 49-21.

Centreville was led by Julian Garrett’s 3 TDs, including one through the air and the other two rushing. Deonte Edmonds scored two rushing touchdowns; QB Jameel Siler completed 7-12 passes for 141 yards and a TD. Chantilly’s Mark Harper scored once for the Chargers and Corey Thomas scored twice.