After screenings, referrals for affordable treatment. 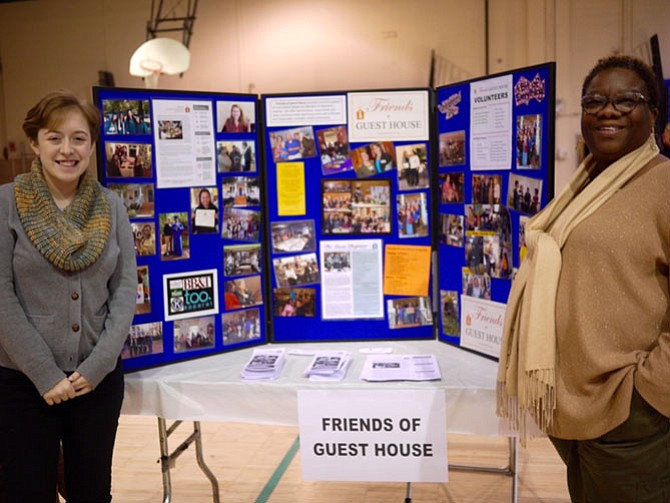 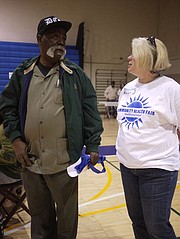 Willie King works as a lobby attendant at the Embassy Suites Hotel. He came to drop off a friend and found out his blood pressure was too high; he is insured, but was reminded to go back and check out his bp. Here he is greeted by volunteer Karen White.

One volunteer dentist at the end of the Health Fair for the Uninsured on Saturday, Nov. 5 examined a young woman and discovered she had a growth on the side of her tongue. The doctor explained the significance, and referred her for a biopsy — right away. He may have saved her life.

The Northern Virginia Dental Clinic (NVDC) provided a total of 157 oral health screenings on Saturday, the vast majority of which were provided to adults.

Oral health has become an increasingly important feature of neighborhood health clinics because of the rise in oral cancer rates and the impact of poor oral care on general health. NVDC provided each individual with a report of findings and treatment recommendations, a list of resources that individuals could access dental care at an affordable cost. Students from the Northern Virginia Community College's Dental Hygiene Clinic provided dental education for young children via their demonstration of proper brushing and flossing on puppets. Due to a donation, the college's Dental Hygiene Clinic was able to register more than 25 adults for free follow-up visits to the clinic for cleaning and examination. Several follow up appointments were offered at the NVDC Merrifield Clinic, and they referred more to Neighborhood Health’s new dental clinic on Route 1 South.

Between 300-350 adults and children received services at the fair: that is about 50 participants over last year’s total of 275. Families filled one intake form, making it hard to be more precise. While results of the fair are still coming in from the participants, the organizers were pleased with the outcome. Neighborhood Health, Alexandria’s community health center, registered a number of new patients Saturday. Walgreens administered flu shots, while nurses from the Global Health College and the George Mason School of Nursing recorded close to 150 blood pressure checks, several of them providing high readings that required follow-up.

Vision and Hearing Screenings provided by the Alexandria Host Lions Club, and glucose and cholesterol screens provided by Kaiser Permanente's Mobile Health Van were among the most popular programs at the fair. Two other screenings that were popular with parents of young children were the developmental screenings for children between the ages of 2.5 - 5 years of age provided by the Kathy Wilson Foundation and the Child Obesity Screens offered by the A. Roy Heron Global Foundation for Community Wellness.

Over the course of the seven hours, the Kathy Wilson Foundation screened 13 children; every screening is conducted by a trained facilitator who walks a family member and the the child through a series of age-specific questions and tasks. A single screening requires on average 45 minutes to complete. The facilitators discovered deficits in fine motor skills among several of the children. According to Susan Keightley, who works with the foundation, the foundation provides all families with follow up activities.

U.S. Rep. Don Beyer stopped by and chatted with most of the volunteers in their kiosks. Beyer and the organizers of the fair talked about how they hoped the General Assembly might agree to pass a Medicaid expansion next year. Del. Mark Levine visited, and was also lobbied by fair organizers to move more General Assembly delegates to support the Medicaid expansion. Silberberg stopped by to praise those who helped organize the fair and all who gave time to make it a success. City Council member Tim Lovain also visited. He has been a major supporter of the health initiatives and managed to get the City Council to approve a $150,000-plus funding package that increased support for Neighborhood Health. Former Mayor Bill Euille was also at the fair; he was the prime mover of the Health Fair effort when he appointed a panel to recommend to him and the council ways of coping with the General Assembly’s refusal to expand Medicaid.