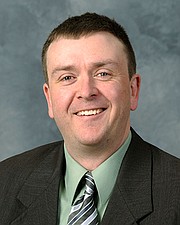 Over the past year, Sawatzky researched the life of Apperson as part of the Understanding Sacrifice program, a partnership between National History Day, the American Battle Monuments Commission (ABMC), and the Roy Rosenzweig Center for History and New Media. On Veteran’s Day, Sawatzky’s eulogy for Apperson and lesson plan, titled “Hit the Ground Running: Evasion and Escape Behind Enemy Lines,” was published online.

The year-long professional development program is centered around Fallen Heroes of World War II who are buried or memorialized at an ABMC cemetery in southern Europe or North Africa. In July, Sawatzky joined 17 other educators as they traveled through southern Europe, walking in the footsteps of history. Using their research, teachers created lesson plans, Fallen Hero profiles, and eulogies now published on the award-winning ABMCeducation.org.

Sawatzky’s lesson plan is based upon a year of research using primary and secondary sources. “Paratroopers have always been a source of wonder and inspiration for students as well as the focus of Hollywood movies and historical documentaries,” he stated. “Jumping out of a plane is an adventure that most of us do not want to attempt. But what happens after the jump? How do they survive once they hit the ground? Often alone and suffering from disorientation, paratroopers hope that what they have packed is enough to survive the challenges that they will face on the ground.”