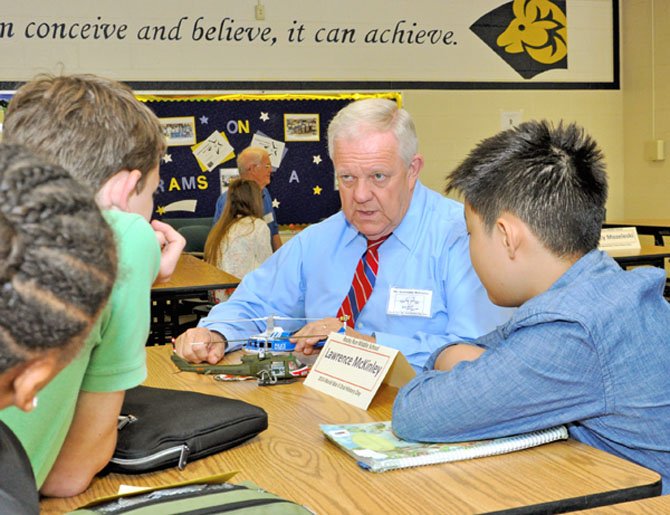 Lawrence McKinley explains the challenges in trying to find patients among enemy territory. He also discussed the hardships of war and said that [we must] “exhaust every avenue” prior to war. Lawrence McKinley served as a Medevac pilot with the U.S. Army Medical Service Corps in both Vietnam and Desert Storm. Photo by Veronica Bruno.

Students at Rocky Run Middle School received the greatest history lesson on D-Day: first-hand accounts from the men and women who served in World War II.

The “greatest generation” officers visited the school for an all-day festival where seventh graders got to hear eyewitness accounts of what happened during the war from the men and women who served there. First-hand accounts included recollections from being enemy prisoners, successful missions, air raids, and special operations. Students had the opportunity to sit down with the veterans and interview them individually. Interviews were conducted all day in the cafeteria as well as the media room.

This is the 14th year Rocky Run Middle School has hosted the event. What originally began as a single WWII veteran guest speaker has grown into an organized event that brings over 100 participants from the war directly to the school. To commemorate the event, framed photos from WWII adorn the halls all year round and photos from the event are displayed. In addition to the WWII participants, the festival also included veterans and eyewitnesses from the Korean, Vietnam, Iraq, and Afghanistan wars as well as people who grew up behind the Iron Curtain.

The WWII Oral History Day is Jamie Sawatzky's “baby.” Sawatzky, a history teacher, envisioned the event after one of his student's relatives came to speak to his class about his WWII experience. The students who participate research their questions for the interviews. The interviews themselves also become a part of history: many of them are taped and will be sent over to the Library of Congress Veteran's History Project.

In addition to the individualized interviews, there were several panel discussions that took place in the school's Little Theatre. Donald Reynolds spoke during the Normandy panel and shared his memories from battling there as well as going back to visit after the war. He included a slide show of his personal photographs from the Normandy visits, and elicited laughs from the audience when showing the difference between the traffic of the day at the Arc de Triumph in Paris — his old photo showed just two cars and a bike whereas nowadays the traffic circle is completely congested.

The Normandy panel also included William Sheads, Buck Shelton, John Swart and Rolf Valintin. After hearing their stories from the shores of Normandy, Sawatzky said, “You guys were the real heroes.”

The last panel discussion of the day was headlined by Rabbi Laszlo Berkowits, who had been deported to the Auschwitz-Birkenau as a teenager and lost both his parents and sibling in the camp.

He told the audience that “knowledge is power. Power is something special, you can use it for good or you can use it for ill. You are free to make choices and you have a gift for intellectual capacity. The Holocaust was a human decision. We can be noble, constructive; I believe we can be builders. What we do or say matters. How we deal with our fellow human being matters. We can benefit from the generation who came before us.”