Fifty-five dancers will be performing in the show on Saturday, Nov. 26, at 2 p.m. and 7 p.m. at McLean High School. 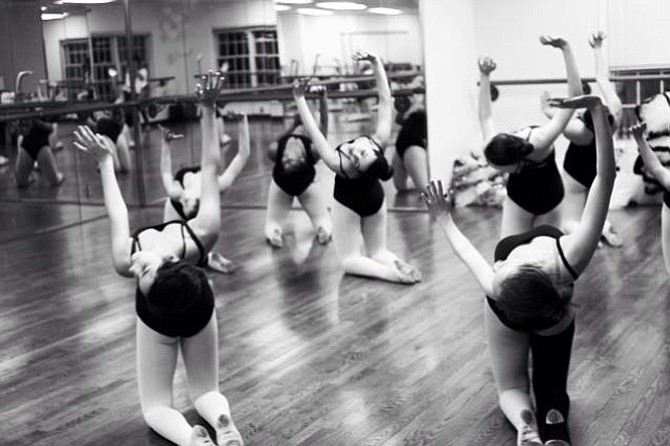 A rehearsal of the studio’s contemporary ballet pieces, a new addition to the studio. Katie Murphy

Great Falls — The Margaret Haddad Studio of Classical Ballet in Great Falls has performed the Nutcracker ballet for decades. Though the studio’s founder –Margaret Haddad— retired last year, her 50-year legacy of teaching classical ballet in the community will continue through one of her students: Casey Jones.

Jones started dancing under Margaret Haddad’s instruction in 1994. By 2001, Haddad inducted her into the studio’s teacher training program.

“When I was [her student], she made a very strong impression on me,” Jones says.

Jones began teaching classes at the studio in the Great Falls Village Center while she was in high school and college. She attended Catholic University of America in Washington, D.C., where she studied fine art and Marymount University in Arlington where she studied communications.

“I took as many dance classes that I could get my hands on while I was in school,” she says. These classes introduced her to different styles of dance outside classical ballet.

She continued teaching occasional classes for Haddad when she graduated. It wasn’t until 2010, when she was teaching part time at another studio, when she realized she wanted more.

Jones’ dream came true last year, 22 years after she began dancing with Haddad. At age 26, she is now the new owner and director of the studio where she grew up dancing.

To this day, Jones’ closest friends are the ones she made at the dance studio as a child. A lot of the teenagers she is teaching now were the first students she ever taught while in Haddad’s teacher training program. These relationships are what helped Jones decide to buy the studio to carry on Haddad’s legacy.

“What drives me is the girls,” Jones says. “The reason I came home was the girls.”

She has not wasted any time making changes during her first year at the helm, including using her marketing skills to modernize the studio.

Jones renamed the studio the Great Falls Classical Ballet and rebranded it to include a new home online: www.greatfallsclassicalballet.com.

THE STUDIO also received a fresh coat of paint, new floors and video monitoring technology that allows parents to watch classes from the studio.

“Before, it was a closed-door policy, very old-fashioned,” Jones says. “The door was closed and you couldn’t see anything that was going on.”

While both male and female dancers are accepted, the studio currently teaches 70 female students that range in age from three to 18.

Under Haddad, the studio strictly taught Russian classical ballet. For the first time in the studio’s history, Jones has incorporated a blend of different dance styles into the studio’s repertoire.

“The girls really enjoy it,” she says. “It’s a great chance for them to be more expressive while still studying a classical art like ballet.”

“She followed the rules to a T … and had a very matter-of-fact way about her,” Jones says. “She loved her students very much. She was very dedicated to them, but she was very harsh and strict and all about the rules.”

The required uniform for students for all practices and rehearsals was a long-sleeved, burgundy leotard with a pink headband.

“That is a fond memory that all the alumni have,” she says. “We think of it fondly, but it was not the most flattering of uniforms.”

Students now wear a black leotard, which Jones says is the standard of the dance world.

Though Jones describes her methods as modernized, she still holds onto certain aspects of traditional Russian classical ballet.

“[Haddad] was known to put on these fantastic productions and giving girls a great dance education, but she was also known as being a bit overly strict in some people’s eyes,” says Jones. “I’m not quite as strict as her, but she’s made a tremendous impact on my career and I try to model my teaching after hers, taking the best parts of it and blending it with some newer things.”

In the spring, the studio performed a recital instead of a full-length ballet for the very first time. It was based on selections from the Sleeping Beauty by Russian composer Pyotr Tchaikovsky.

According to Jones, this allowed her to be more creative because the performance wasn’t limited to certain characters or costumes.

But some things will never change.

The studio’s final performance of the year will be the same ballet it has always performed in the fall.

“Every year, Mrs. Haddad would keep the same steps to the Nutcracker, so as you grew up you would watch the older girls and you would learn the steps,” says Katie Warner, 17, who is a junior at Duke Ellington School for the Arts in the District. “You would hope one day that you would get the part that you had seen for years and years.”

She has been dancing at the studio for 13 years, since she was just 4 years old. The part that she would closely watch was the part of the mirliton doll. One of her fondest memories was finally being selected for the part.

“Once you’ve done a show 13 times, you know it back to front and when you finally get to do the dance that you love, it’s very exciting,” she says.

THIS WEEKEND, she will be dancing the parts of Countess Drosselmier, a departure from the ballet’s traditional male role of Count Drosselmier. She will also play a snowflake, a Spanish doll and a flower in the Waltz of the Flowers.

“A lot of the dances have elements of Haddad’s choreography, but 90 percent is new,” she says. “It’s good to have things that you know, but it’s also nice to learn new things and new costumes.”

Fifty-five dancers will be performing in the show on Saturday, Nov. 26, at 2 p.m. and 7 p.m. at McLean High School. It will be the culmination of the first year without Haddad, which was a tremendous adjustment because of the enormous role she played, says Jones.

“The girls have worked very hard on this, especially the older dancers,” Jones says. “We rehearse almost every weekend for hours and hours.”

Though Haddad, in her 70s, retired and moved to Florida, she still stops by the studio from time to time and attends performances.

“She loved her job so much, I think she would have kept doing it for the rest of her life if her body would have allowed it,” Jones says. “I know she misses the studio very much and there is a part of her that wishes she didn’t have to retire, but I do think she seems to think very positively of [my changes].”

Even in retirement, her legacy will carry on. As of this fall, Haddad’s young granddaughter enrolled in classes.