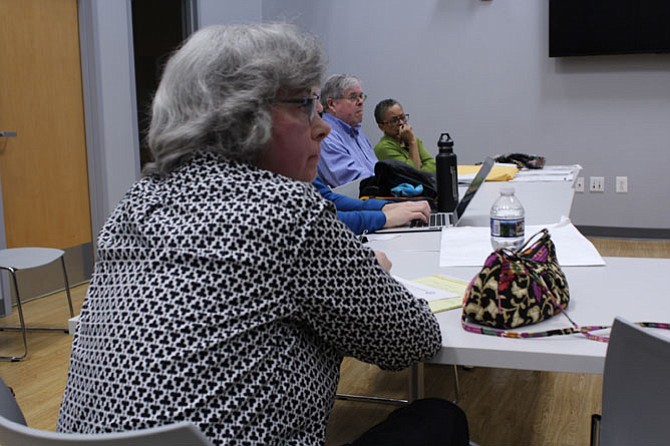 Ellice Stern of Reston makes a motion to deny the application, which carried. Photo by Fallon Forbush.

Herndon — On Tuesday, Nov. 15, the Hunter Mill District Land Use Committee voted 3-2 to deny an application to build a cellphone tower on Crossfield Elementary School property on Fox Mill Road in Herndon.

The committee, which provides guidance on all land use applications in the district, denied the application by Reston’s Milestone Communications because the proposed site was too close to the school’s playground. The 138-foot tower would have been located 150 feet away, according to the application.

However, a group of organized and concerned parents have argued that the actual location is closer to 60 feet away from the play area.

Ellice Stern of Reston, John Mansfield of Vienna and Steve Cerny of Reston, who is also the committee’s chairman, voted to deny the application.

Jared Wilcox of Reston and Douglas Noble, a Vienna councilmember, voted to approve the application as is.

...a group of organized and concerned parents have argued that the actual location is closer to 60 feet away from the play area.

Thomas Wyland, Jr. of Oak Hill recused himself from the vote since his employer is a parent company of Verizon, which is involved in the project.

“Usually in these situations, we look for a compromise,” Stern said during the public hearing. “We were told that the playground could not be moved, which would have been a compromise.”

Stern was also concerned about ice forming on the tower.

“If you get a 20-mile-per-hour wind and it blows that nice big piece of ice towards the playground, then where are we?” she said. “It’s not worth it.”

“We understand that there’s sensitivity to the location of the tower and the proximity to the playground after hearing from both the community as well as the land use committee members and we take these comments to heart,” says Len Forkas, Jr., the president of Milestone Communications.

He says the problem for more cellphone infrastructure is not going away and that his company will be successful at finding an alternative location on the school’s property.

MILESTONE has built over 20 towers on the county’s school property, according to Forkas.

“Sometimes the first place we select is not the best location,” he says. “Our goal is to always find a solution.”

While the committee voted to deny the application, it also recommended that Milestone make a formal application to locate the tower on adjacent Park Authority property within the Fred Crabtree District Park.

“The Park Authority has no record of an application being made to site a tower at the adjoining Fred Crabtree District Park location,” said a letter written to the committee from William Bouie, chairman of the Park Authority.

But Forkas thinks it is a moot point.

“Where the lines that define the ownership of the real estate is less important than understanding the nature of the concern of moving the tower,” he says. “In the end, the message I’m hearing is that people are concerned about its proximity to the play area. If that’s the understanding, we’re within a very short distance of the park boundary and still would be proximate to the play area. The issue would be the same. It’s irrelevant to who owns the real estate.”

Randall Griffin, a vocal opponent to the application, has also criticized Milestone and the county school board of not following school policy, which requires community meetings to allow for public comment on all proposed telecommunications projects.

Randall Griffin, a vocal opponent to the application, has also criticized Milestone and the county school board of not following school policy, which requires community meetings to allow for public comment on all proposed telecommunications projects.

“We know how to do this and we’ve followed the procedures in this application,” says Forkas. “We’re good at this. The accusation that we didn’t follow procedure, we don’t concur with that accusation.”

Milestone’s towers on county school properties has generated more than $13 million of income over the last 20 years for the school system, says Forkas. The proposed tower would generate approximately $40,000 of revenue a year for the school system once at least three carriers agree to use the tower, he says.

“This is about money, not anything else,” says Griffin, who is a father of a fourth grader who attends the elementary school.

A STATEMENT released by the organized group of concerned parents said the Fairfax County School Board has ignored the outcry from the community to withdraw the application.

“It is disturbing to the community that FCPS is allowing this to continue and has put the tower company ahead of its students,” the statement read.

Morgan Lewis, who is the mother of a 10-year-old daughter who attends the elementary school, said during the hearing that it was “fascinating” that Hynes had not attended any of the public meetings about the issue or engaged the concerned parents in any conversation.

Though the committee denied the application, it is ultimately the Fairfax County Planning Commission’s decision.

“Frank [Frank de la Fe, the Hunter Mill District commissioner on the Fairfax County Planning Commission] wants to know what our recommendation is,” says Cerny, the chairman of the committee who also represents Reston.

Ninety-eight percent of the time, Cerny says, the Planning Commission agrees with his committee’s decisions.

The Planning Commission, which had a public hearing the following evening—Wednesday, Nov. 16—decided to postpone its decision on the application indefinitely.