Vienna: Stronger Together in Vienna
Votes

Vienna: Stronger Together in Vienna

Community rallies in support of inclusion and kindness 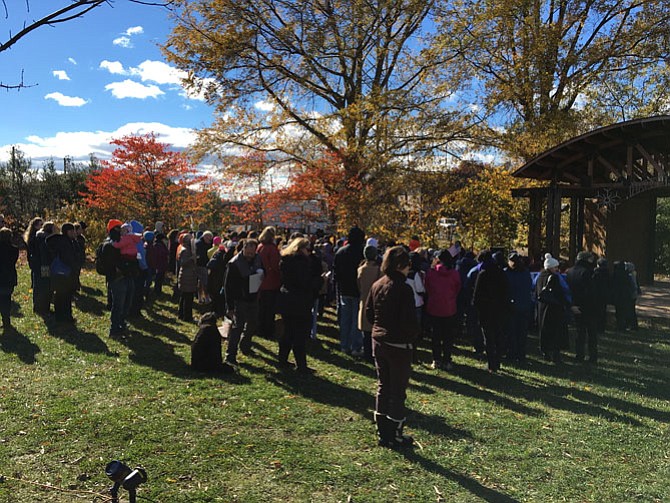 Approximately 150 people walked from the Vienna Town Hall to the Town Green in a display of unity. Rally co-organizer Laura Magane Goyer says the walk and rally are inclusive, showing compassion toward one another. Photo by Donna Manz.

Vienna — A young mother living in a bombed-out German town in early 1942 fled with her children to a less-dangerous home in Germany, seeking safety and refuge. Eventually, in 1952, they made their way to the United States. Although the U.S. had been warring with Germany less than a decade earlier, the family became citizens. Her boy Rolf went on to earn a Ph.D. in physics from the University of California at Berkeley. On Sunday, Nov. 20, in Vienna, Virginia, Rolf’s son Dmitri stood along with 150 other local citizens at a peaceful “unity” walk and rally from the Vienna Town Hall to the Town Green. On Mehlhorn’s back was a sign that said, simply, “My father was a war refugee.”

“I’m here to let my neighbors know I’m here for them; they are safe.”

Approximately 150 Vienna-area residents rallied for an hour on a cold, blustery, wind-swept Sunday afternoon. Parents pushing strollers, kids walking alongside their bikes, dogs on leashes sidling up to their humans, and youths and adults of diverse races and backgrounds came together in a common purpose --- to defend compassion and tolerance, and, to support those citizens threatened by the tenor of the times.

“We are doing this out of a sense of unity that can only be achieved through community,” said co-organizer Laura Magane Goyer. “It is welcome to everyone. The bottom line is that we are inclusive, compassionate toward one another.”

Some participants, such as Mina Salama, have confidence in the people’s will regarding the new administration’s cabinet picks. “I’m hoping that people will stand up and show their compassion,” she said. “… [elected officials] are there to represent the people.”

Although no participant identified him or herself as a Trump voter, one Republican – Karen Doner - did voice her position, which was not to vote Republican in this election. “I did not support the candidate because he’s unfit for office based on his statements and actions,” Doner said.

Extolling compassion, tolerance, inclusiveness, and diversity were the common sentiments of the rally’s participants. Some carried signs with a positive message; others wore t-shirts or button pledging “Love Trumps Hate.”

Most participants were hopeful although nobody articulated how love and compassion were to overcome hate and bigotry. The communal sense was that citizens let their neighbors, their community, know they are supported.

Tara Voight said that it is important for citizens to come together to support each other and to support diversity, tolerance, gender equality, and sexual orientation. “We have to support those who may feel intimidated, threatened,” she said. “Standing together, to show love, compassion, and tolerance are the most important thing.

Kim Carroll and Jean Ellison carried a large sign that expressed a multitude of beliefs, from celebrating diversity to the cost of ignorance.

“We want everyone to come together to support those from diverse backgrounds who might be very worried now,” Kim Carroll said.