On Sunday, Sept. 18, 2016, Dr. John David Farrell entered into peaceful rest after a long illness at home with his family at his bedside. He was born March 24, 1937, at Mercy Hospital in Pittsburgh, Pa. 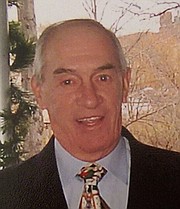 Originally from Clarksburg, W. Va., he is a 1955 graduate of Campion Jesuit High School, a Jesuit boarding school for boys in Prairie du Chien, Wis.; a 1959 graduate of the University of Notre Dame. He completed his medical training in 1965 after his internship at Medical College of Virginia, Richmond, and residency at Children’s Hospital of Pittsburgh; Member American Academy of Pediatrics.

After completing his medical training Dr. Farrell served in the U.S. Navy Medical Corps at the U. S. Naval Hospital, Pediatrics, Camp Lejeune, N.C. In 1968-69 he served in Vietnam pacification program as a Navy pediatric physician advisor II corps, Milphap Team N-4 in Nha Trang and Saigon treating plague, malaria and tuberculosis. After being discharged in 1969 he continued to serve in the U. S. Navy Reserves receiving an honorable discharge as Lieutenant Commander April 1975. He received the National Defense Service Medal, Vietnam Service Medal and Vietnam Campaign Medal.

Following his tour in the military, in 1971 he moved to Reston, establishing Farrell Pediatrics in Hunters Woods Village Center. He served as a physician at Inova Fairfax and Reston Hospitals. In 1985 he moved his practice to Sunset Hills Professional Center. The practice still bears his name and continues to provide pediatric care to youth of Northern Virginia.

Information and condolences at www.adamsgreen.com