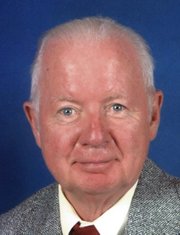 Longtime Reston resident Francis M. (Frank) McClarnon passed away on May 29, 2012, at Reston Hospital, after suffering a stroke on May 19. Frank moved to Reston in 1974 with his wife, Agnes, and four children, Mary Alice (Jay) Minnix, John (Carol) McClarnon, Michael McClarnon, and Martin (Tina) McClarnon. Known to many as "Uncle Frank," he was a coach for Reston Soccer Association, a longtime member of the Blackthorn Stick and Northern Virginia Ceili (Irish dance) Clubs, and a member of St. Thomas a Becket and St. John Neumann Catholic communities. Born and raised in the Bronx, N.Y., by Mary Sheridan McClarnon of County Mayo, Ireland, and Fred McClarnon of County Fermanagh, Ireland, Frank earned his Ph.D. in Civil/Structural Engineering from Carnegie Institute of Technology (now part of Carnegie Mellon University). He then worked as a professor of civil engineering at Fenn College in Cleveland, and Brooklyn Polytechnic Institute (now Polytechnic Institute of New York University). He spent most of his career with McDonnell-Douglas Automation, in St. Louis, Missouri, and in 1974 transferred to Falls Church, Va., at which time the family moved to Reston. Frank worked for the U.S. Defense Mapping Agency for the last 12 years of his career, and after retirement, tutored local high school students in math and physics. A devoted family man, Frank is survived by his wife and children, as well as by his four grandchildren, Cara and Diana Minnix, Sean and Matthew McClarnon, and his sisters, Betty (Brian) Daly and Marion (Tom) Farrell.

In lieu of flowers the family asks that memorial contributions be made in his name to the Wounded Warrior Project online at www.woundedwarriorproject.org.