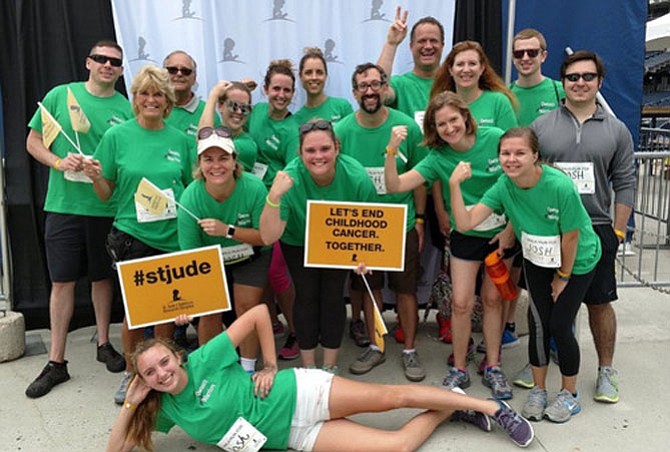 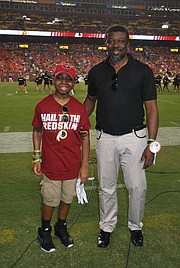 Joshua Owusu’s bell-like soprano voice floated through the reception hall, carrying the words “Maybe we found love right where we are,” from singer Ed Sheeran’s hit “Thinking Out Loud.”

A video projected on one side of the hall showed Owusu, a sixth grader at Stratford Landing Elementary School, performing confidently and innocently onstage, sharply dressed with suspenders and a clip-on bow tie.

Some of those gathered took videos of the projection with cell phones, others watched and smiled, tears coming. Others looked away.

Owusu was diagnosed with brain cancer — glioblastoma — in March earlier this year. On Sept. 26, he died while in the care of INOVA hospital and with family members.

The reception on Oct. 8 directly followed Owusu’s funeral at Aldersgate United Methodist Church in the Mount Vernon area of Alexandria. The service included a poem inspired by the young student and a choir of his sixth-grade classmates singing “Somewhere Over the Rainbow” directed by Lianne LaFleur.

Many wore green, Owusu’s favorite color, while others wore ornate black and white dresses and robes with geometric and flowery patterns.

Near the center of the room, the boy’s parents sat at a table accepting a steady stream of embraces, words of condolence and other caring hands reaching out for them.

“Joshua had an incredible smile and spirit of life,” said Stratford Landing counselor Stephanie Kasparek. “It seemed as though every moment was a new adventure for him and he took risks, inside the classroom and outside with peers. That thirst for knowledge did not dissipate even after brain surgery and radiation treatments.”

Owusu was enrolled in the Advanced Academic Program center at Stratford Landing. His base school was Groveton Elementary.

“He touched a lot of people in the short time he was there,” said Stratford Landing assistant principals Shirley Shannon and Christine Prahl.

“If you did not have the pleasure of encountering Joshua, he was a happy, charismatic child, whose smile could brighten anyone’s day,” said Stratford Landing principal Maureen Marshall. “He was loved by all who knew him.”

The Stratford Landing and Aldersgate communities came together to raise money help Owusu’s family with the funeral and burial costs. “So they could grieve without worrying,” Marshall said.

They also created sign-ups for families to provide food for Owusu’s family, as well as the reception.

“The generosity of the Aldersgate and Stratford Landing communities was astounding,” Kasparek said, “especially since most donors had never met Josh or his family.”

In his homily at the funeral service, the Rev. Jason Micheli explained that Joshua wanted to be a pastor when he grew up.

“If I’d had more time with Joshua I might’ve tried to talk him out of being a pastor,” Micheli said. “After all, it’s not a gig that pays very well but, then, Josh is smarter than me and he already had a plan figured out for that wrinkle.”

As a kind and non self-conscious peace-maker among his friends, siblings and even parents, Micheli said that Joshua was “already a pastor, to you all.”

“Josh was filled with a spirit that could’ve only come from Jesus Christ,” Micheli said, interpreting from the Bible’s book of Matthew: “I can’t begin to answer why Josh isn’t here, but I do know where Josh is now. I know because whenever anyone asks Jesus about heaven in the Bible, Jesus responds by saying, ‘You’ve got to know this kid.’ You’ve got to become just like him.”

At Stratford Landing, students and staff had already been spending time learning about dealing with cancer in their immediate community.

Michelle Crabtree also spoke to the school recently about her first grade son, who is in remission from leukemia.

“You don’t think about children with cancer until your child is diagnosed with cancer,” Crabtree said in a statement.

“Childhood cancer is considered rare, yet in the 2015-2016 school year, there were four students either currently fighting cancer or that were cancer survivors at Stratford Landing.

“Awareness is key in helping to get more research dollars dedicated towards childhood cancer,” Crabtree continued. “Maybe a student from Stratford will grow up to be a researcher that helps find better treatments and one day a cure for childhood cancer.”

Rain fell steadily outside the church during Owusu’s reception. His burial service was held that afternoon at Mount Comfort Cemetery.

“Tragedy should not befall children, but that is the harsh reality that sometimes needs to be faced,” Stratford Landing counselor Kasparek said. “Joshua looked his tragedy in the eyes, and chose to live in spite of it.”