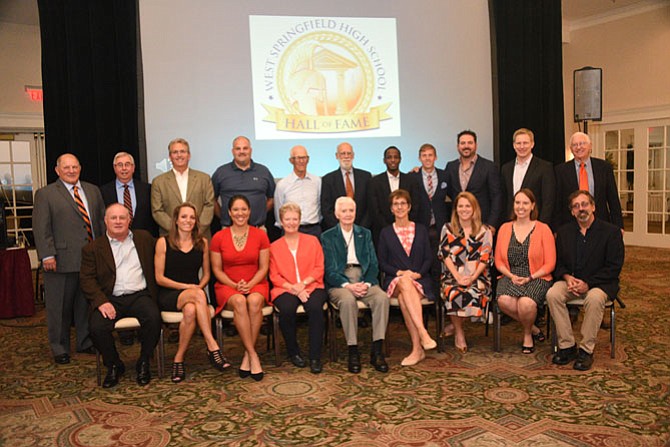 West Springfield High School continued to celebrate its 50th anniversary by inducting 21 individuals into its inaugural Sports Hall of Fame at the Waterford in Springfield on Oct. 8. Photo courtesy of Candid Color

West Springfield High School continued to celebrate its 50th anniversary by inducting 21 individuals into its inaugural Sports Hall of Fame.

The honorees, which included five coaches, one contributor, one team and 14 athletes, were recognized at the Oct. 7 football game against West Potomac High School. A formal induction luncheon took place the following day at the Waterford in Springfield.

Current West Springfield principal Mike Mukai said the game was “a great atmosphere,” despite the Spartans’ loss to the visiting Wolverines 47 to 40.

An early highlight of the game was Fairfax County Police delivering the game ball via helicopter. Former Spartan soccer and basketball player Brian Carroll also stopped by in between his own games with the Major League Soccer team Philadelphia Union.

Mukai said there were four teachers from the original 1966 West Springfield staff in attendance, two of which were also members of the 2016 hall of fame class.

“So many came back who wanted to honor coaches,” Mukai said. One of those was former field hockey and girls’ basketball coach Shirley Duncan, who helped shape Title IX legislation.

A special website was created for the hall of fame, which has names, sports and years for each of the inductees. The plan is for it to contain more biographical information as well as a video for each former high school athlete.

Inductees were chosen by a committee that looked at accomplishments after high school as well, but focused first on “what they meant to the school,” said assistant principal Betsy Fawsett, “what an individual mean to the team.”

Next year, Fawsett said, they plan to induct just 15 new members into the hall of fame, and 10 the following year.

Also in the works is an Academic Hall of Fame.