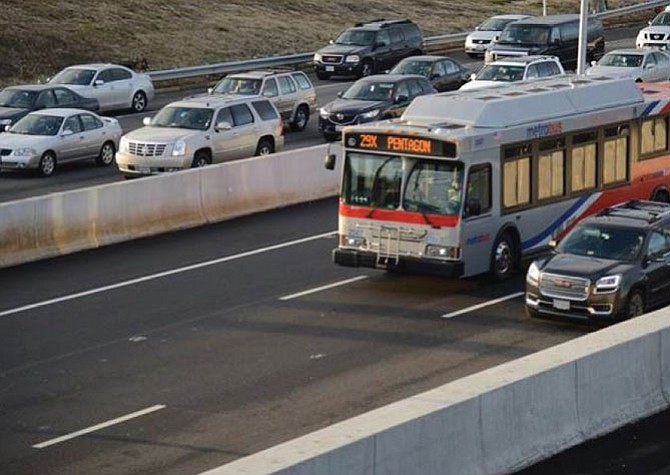 The existing HOV lanes on I-395 McCord, Jennifer (VDOT) 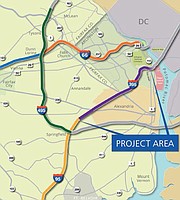 Map of the extended stretch of I-395

Arlington — The I-395 extension is here. As the Virginia Department of Transportation (VDOT) gets closer to the project’s start in spring, 2017, outreach has started to the affected communities near the road and to the County Board.

The project will replace the two existing high occupancy vehicle (HOV) lanes with three express lanes. At a County Board meeting on Oct. 18, VDOT staff said that the project will work within the existing footprint but will add substantial transit to the street. As the project moves forward,VDOT will host a series of public meetings throughout the county to discuss the project and gather public input. The next meeting will be held on Wednesday, Nov. 30 at 6:30 p.m. in Bren Mar Park Elementary School.

The board’s response to the project was tepid. Dennis Leach, director of Transportation, said the county staff has identified a few areas within the VDOT plan that will merit further review as the project goes along. Staff will monitor the plan’s traffic impact on Arlington streets, mainly around Pentagon City and the Eads Street interchange, but also in Shirlington where staff is concerned about traffic overflow.

The second issue, and one the County Board spent the most time discussing, was the potential noise mitigation measures. With the additional traffic, local neighborhoods could be entitled to have noise barriers erected along the highway. But more noise barriers would mean more construction and destruction of local vegetation, and the effect of the barriers on local properties remains uncertain.

According to VDOT staff, the decision of whether or not to erect sound barriers will be decided by a simple majority of votes from affected neighborhoods on ballots sent out by VDOT.

“From a macro perspective, this clearly has the ability to ease congestion in the area but that’s mostly to the benefit of people we don’t represent,” said County Board Member Christian Dorsey. “What would benefit us the most would be a more robust investment in transit. Twelve percent of the people move on a mode that’s used for one percent of the trips. Though our influence here is limited, we need a more robust and smart investment in transit.”

Ultimately, the County Board has little say in how the project proceeds.

“[The County Board] has no prescribed role, but [it] obviously represents a large proportion of the citizenry that is directly affected by this project,” said Stephen MacIsaac, the county attorney. “There is no doubt that VDOT is going to proceed with this project whether the county wants it to or not, and so the most benefit is to become actively involved and look for the information that would be helpful to understand in terms of impacts on the community and try to get those impacts mitigated.”