Work Beginning on I-66 Outside Beltway
Votes

Work Beginning on I-66 Outside Beltway 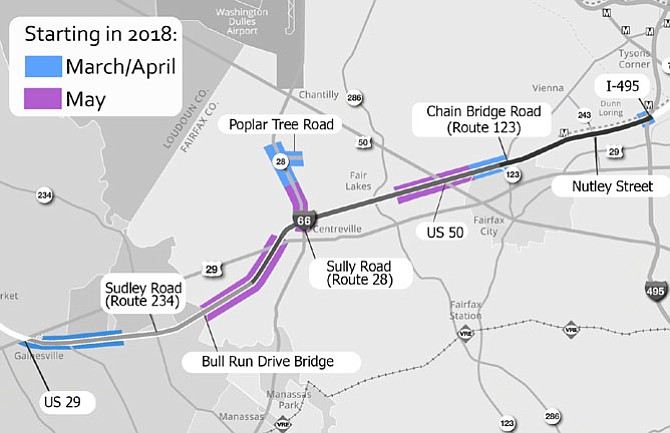 Map showing the timeline of the spring roadwork for the I-66 Outside the Beltway project.

(Click on "Download .JPG" to see large map.) Diagram of the new I-66/Route 28 Interchange. Work should begin in late May.

With work on the I-66 Outside the Beltway project about to begin, VDOT says it’ll do its best to keep the traffic moving. But it won’t be easy and there are no guarantees that delays won’t ensue.

“A key feature is that the red X/green arrow lane will go away during peak periods, during construction, and just become a fourth travel lane,” said Nancy Smith, spokeswoman for FAM, the project’s design-build team. “And workmen can make it a construction lane, during nonpeak hours, as needed.”

Besides that, said Susan Shaw, VDOT’s Megaprojects director, “They’ll be narrow lanes and will be constrained. Basically, we’re converting I-66 to a construction zone. There’s no doubt we’ll impact traffic flow on I-66, but there’s no way around it. That’s the reality of what we’re facing.”

They were speaking during the Feb. 28 meeting of the Sully District Council (SDC) of Citizens Associations, updating local residents on the project’s status and what’s to come. And preparations are still underway.

“We’re looking forward to ramping up our construction this spring,” said Smith. “Interactive signs in the I-66 Corridor will be transitioned away because they’ll be in the way of the work. We’ve got a long road ahead, but we hope to have the express lanes open by December 2022.”

Currently underway are voluntary, pre-construction surveys of homes near the work zone to assess their condition before and after the work. Geotechnical surveys are being done to see what’s underneath the ground surface and check the soil. And utility surveys are also being conducted to find out where the utilities are so they can be moved before work begins.

The project entails 292 right-of-way acquisitions, some of which are utility easements. However, 10 involve residential relocations, and VDOT is still negotiating with the property owners. Trees within the existing right-of-way will be removed, where necessary, concrete barriers will be placed, and long-term lane shifts will be established as work zones are set up.

“We’ll shift traffic toward the center median first, so workman can work on the shoulders,” said Smith. “Then we’ll shift it away from the median. It’ll be four lanes still, including HOV lanes.”

Little Rocky Run’s Al Francese asked what the impact would be on Route 28 traffic during I-66 construction. Pulling no punches, Shaw said traffic on Route 28 will get worse – “And especially when Wegmans opens [off Route 28 in Chantilly on June 3]. But we’re trying to get people to change their travel strategies, to the extent that we can.”

She said construction will occur mainly during daytime hours, but there will be nighttime construction, as well. “We’ll make sure to work with the communities [to advise them about it,” said Shaw. “We’ll do our best to minimize [the impact], but there are some things we cannot do during the day, like, for example, demolish a bridge. So we’d have to shut down the road then – and the best time for it would be overnight.”

SDC member Jay Johnston asked about the scope of the Route 28 work, and Smith replied, “We’re completely building the I-66/Route 28 Interchange. We’re hoping to start work clearing trees along the VDOT right-of-way in mid-April. We’ll first do northbound Route 28 and then southbound.”

Actual construction of the interchange, itself, should begin in late May. The project area extends north to where Poplar Tree Road meets Route 28, east to Stringfellow Road, and west to near the I-66/Route 29 intersection.

It adds a new bridge funneling traffic from Poplar Tree Road into Ellanor C. Lawrence Park and provides a new access to the park from Route 28. It also improves the Route 28 bridges crossing I-66 and will provide new access ramps to the managed lanes on I-66.

Jeff Parnes, the SDC’s Land-Use and Transportation Committee chairman, said his predecessor on the Transportation Advisory Committee, Dick Frank, recommended that Walney and Braddock roads be connected. And once the new interchange is completed, an overpass will join them. So, said Parnes, “His plan will have come to fruition, so I think this overpass should be named after him.”

Meanwhile, regarding another work site important to local residents, Shaw said that, “At Monument Drive, you’ll be able to get into the HOV or express lanes and go in either direction. People will be able to come off I-66 West onto Stringfellow Road during nonpeak hours, but they’ll have to be in the express lane. Single drivers will have to pay to do so.”

Noise walls, where applicable, are also part of the I-66 project and are particularly important to residents living along the interstate. “The noise issue is a big concern along this whole corridor,” said SDC member Mark McConn, of Centreville’s Bull Run Estates community.

“A neighbor is losing part of his yard, and that’ll bring the project noise closer to him,” continued McConn. “And people along Brim Lane [paralleling I-66 near Bull Run Regional Park] will lose the tree barrier and, in essence, their noise wall. It’s frustrating that VDOT doesn’t care about this.”

But, replied Shaw, “We don’t count trees as noise mitigation. We’re trying to get safety, highway and capacity improvements all along this corridor to save lives and affect the most people.”

“We’re working on our final-design, noise analysis to be finished in late May,” added Smith. “It will tell us where noise walls should go, and their height. If you have a noise wall today, you’ll have one at the end of the project. And they’ll be at the same height, or higher, than the current ones. We have a maximum of 240 days, weather permitting, to get a new wall up after we’ve taken one down.”

Still, that’s eight months. And, said Johnston, “For someone living next to [I-66 and the construction work], that’s a long time and a lot of racket.”

Leonard Wolfenstein, with Fairfax County’s Department of Transportation, added that “The county’s interested in seeing this trail, although our preference would be that it not be on the highway side.”

The entire 22.5-mile project runs between I-495 and Gainesville. Smith said VDOT has a whole program to keep I-66 traffic moving during construction, and “We’ll work hand-in-hand with them on it. And there’ll be incentives for people to take buses.”

Shaw said incentives would also be given to people creating new vanpools and carpools. And Parnes suggested erecting signs at the Monument and Stringfellow park-and-ride lots, encouraging people to form slug lines to carpool. For more project information and to sign up for construction and lane-closure updates, go to Transform66.org.