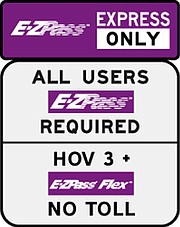 29 Miles Express Lanes on I-95 will require an E-ZPass.

Beginning next month, a 29-mile stretch of I-95 should look a little different. Existing HOV lanes will change to “Express Lanes,” offering drivers with an E-ZPass a less congested alternative. The change affects 95 starting in Stafford County around Garrisonville Road, north to I-395 in Fairfax County by Edsall Road.

The Virginia Department of Transportation (VDOT) partnered with the Transurban and Fluor-Lane 95 LLC for design and construction of the $925 million project. Funding came from Virginia’s Public-Private Transportation Act.

VDOT recently released results from an online survey of 1,200 Northern Virginia drivers conducted last month. They concluded from the sampling that many drivers aren’t prepared for the new lanes to open.

To access the lanes, all cars must have an E-ZPass, the flat, white transponder that sticks to the inside of the windshield.

There are two types of passes available: the E-ZPass pays a toll wirelessly when drivers use the Express Lanes; the E-ZPass Flex works the same while in toll mode, but can also be switched to HOV mode. With three or more passengers along for the ride, Flex cars travel the lanes toll-free.

Once the lanes pass north of the Edsall Road area on I-395, the current HOV rules go back into effect. Even with an E-ZPass, cars with fewer than three passengers have to exit during HOV hours.

Drivers can find out more information on where to purchase either kind of E-ZPass, as well as direction reversal schedules and the HOV transition location at the official website: www.95expresslanes.com.