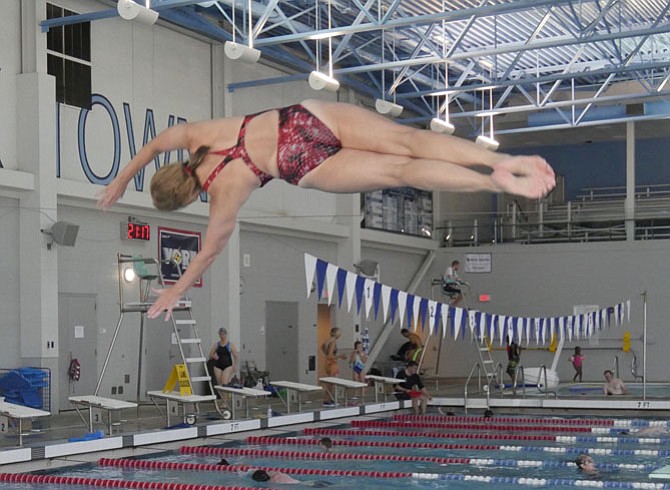 Carol Mackela adds a half twist to her dive at the Senior Olympics. Mackela started diving again after a 33-year hiatus from the sport. She heard from a college diving partner that the partner was doing well, "so I decided to give it a try again, too. She is deceased now so every dive I do for Mary." Mackela, who lives in Arlington, says that she and Karen Alderman are undefeated national champions in master synchronized swimming in their age category but this isn't an event offered in the NVSO competition. Photo by Shirley Ruhe.

The Northern Virginia Senior Olympics (NVSO) opened Sept. 10 with an afternoon splash at Yorktown Aquatic Center. Opening ceremonies for the 12-day event ending Sept. 21 were held at 9 a.m. at Thomas Jefferson Community Center followed by a variety of track and rowing events in the morning. Later in the day eight men and women seniors, including national medalists and new swimmers, participated in the diving event in their age categories. Jim Mackenzie, chair of this year's event, said 918 seniors have signed up this year, breaking last year's record of 820.