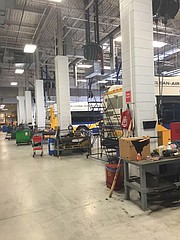 DASH bus in repairs at the facilities headquarters off of Duke Street. 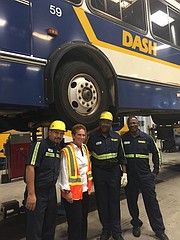 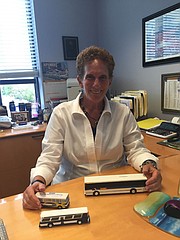 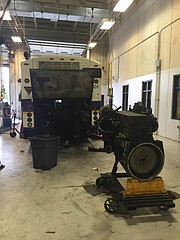 DASH bus in repairs at the facilities headquarters off of Duke Street.

Thirty-two years after she started driving buses part time in Harrisonburg in college, Sandy Modell is retiring from her position as CEO and general manager of DASH, the Alexandria transit company. For 28 years, Modell led DASH through massive expansions. Since Modell started, the company has grown from one million passengers on 17 buses to four million passengers across 85 buses.

“You get diesel in your blood,” said Modell. “The more I helped people out as a bus driver, the more I realized how important mass transit is.”

After working to reform Harrisonburg’s bus system, in 1984 Alexandria hired Modell to help start its new DASH bus service. When she came onboard, Modell said the main problem she saw was that most of the routes ran through Braddock Road and Old Town. Getting from Del Ray to Landmark Mall or the hospital in the West End was an all-day affair. Modell says one of her first priorities was to move the city’s transportation hub to the more central King Street to allow for more direct routes between the different areas of the city.

“For over 30 years, Sandy [Modell] has been the energetic force behind the growth of DASH,” said Paul Abramson, chair of Alexandria Transit Company board of directors. “DASH started as a small system and is now a very important service to the city. She has established very strong relationships and been an advocate for DASH, not only with city officials but also with the community. She really helped create a very affordable, safe, and reliable transit system for this city.”

Abramson said Modell’s friendly work environment comes from being very involved with the employees and being well connected with them. Around the DASH office, Modell seems to know every driver and mechanic, quickly engaging them conversations about their life and ambitions. Modell takes great pride in the fact that most of the supervisors and administrators, like Modell, started out as bus drivers or mechanics.

“We are a unique system here,” said Modell. “Most of our supervisors have come up through the ranks. There can be a tendency for people’s heads to swell, but we want them to remember where they came from. I want them to encourage and coach. We have a team approach here, we’re like a big family.”

In recent years, Modell says the biggest problem has been lack of funding. Increased congestion has forced DASH to add more buses just to stay on schedule, but budget cuts have made it increasingly difficult to keep up with demand.

“We’re three years behind in our long range plan,” said Modell. “We still have some routes where we’re only running one bus every half hour. You’re going to miss a lot of people. There’s a budget shortfall in the city, so we’re competing with all the other urgent needs, like schools and mental health care. Unfortunately, giving to one means another is losing out. My hope is dedicated funding for DASH and the Metro.”

Modell says one of the other major challenges in recent years has been hiring and retaining good drivers.

“Without a driver, that bus won’t leave the garage,” Modell said. “The baby boomers are retiring. Where are the new drivers and mechanics coming from? Nobody wants to be a heavy duty mechanic or do that kind of work now. We’re just not making mechanics and drivers anymore.”

Modell says the negative perception of work as a mechanic or a bus driver is a shame, because she says it’s an exciting time in the industry.

“There’s all kinds of new technology on these buses,” said Modell. “I drove buses in m day with no power steering or air conditioning. Now, they talk to you, and we’re going to have real-time bus information before I leave.”

Modell is retiring to launch the Holistic Hound Academy, a school that aims to teach dogs and their owners about positive reinforcement and how to integrate training into everyday life.

“It’s been my vision and dream of opening a canine academy, and when I look at my age and the future, I don’t know that I could expend that energy into opening up a brick and mortar location in another five years.”

As the city looks for a replacement for Modell, she says her successor will need to be innovative to address growing demand with tighter budgets.

“DASH needs someone willing to look at challenges as opportunities, who reaches out to the community and likes to talk to customers,” said Modell. “I would tell that person: go to civic associations and business meetings. Stay alert for new technology. Be good to your employees; if you treat them right they’ll be better to the customers. We have a great thing going here. Don’t mess it up.”