After a 0-4 start, Saxons play at Fairfax High Friday. 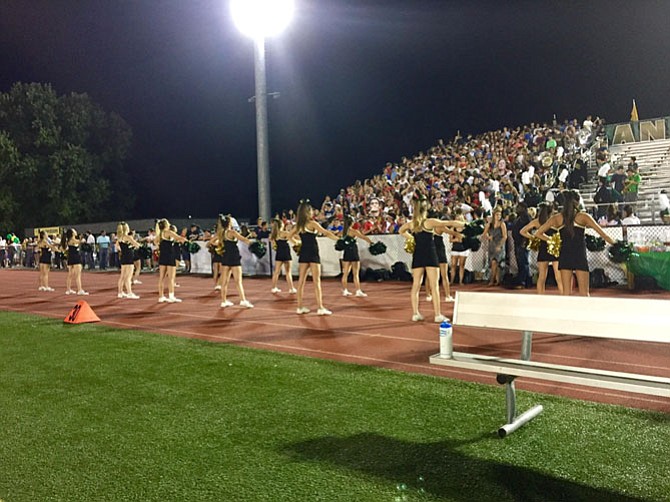 The Langley Varsity Football team took on Madison High at a home game Friday night, Sept. 23, and the stands were not lacking in spirit. Photo by Peyton Jacobs/The Connection

The Langley Varsity Football team took on Madison High at a home game Friday night, Sept. 23, and the stands were not lacking in spirit.

Students rocked patriotic face paint and attire, chanting and dancing along with the cheerleaders as their green and gold pompoms sparkled in the bright stadium lights. Parents joined in and children held signs with pictures of players’ faces, jumping up and down as their brothers and friends moved the ball along the turf.

The band was playing classics such as “Iron Man” and other game night tunes to get the crowd excited. The director of the band, Doug Martin, danced along below the bleachers where the band stood.

While there were plenty of good plays and the team gave it their best effort, the score came out 14-33, Madison with the win, dropping the Saxon’s record down to 0-4. “There were too many mistakes, both ways,” veteran Langley coach John Howerton commented. “I know that the boys gave it their all, but they get tired toward the end and I can see that.”

When asked what the team will work on moving forward from this, left tackle Ryan Tucker remarked that depth training, tackling defense, and offensive inconsistencies will be most important for this season. “With the newer players it’s tough, but I think that we will be able to get there,” he said.

After nearly 32 years of coaching, Howerton believes that they will turn this around, too. When asked about his coaching philosophy, he answered, “Discipline, play the way you teach, and do the best that you can all the time.”