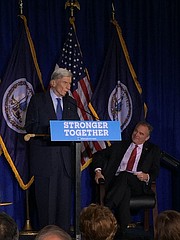 “Clinton has always been prepared and always done her homework,” Warner said. “At the Armed Services Committee, she was always there early and had one of the best attendance rankings. When speaking to military personnel, she was firm and fair but always respectful. Respectful: that's a word you don't hear a lot on the other side of this ticket.”

Warner also briefly criticized Trump’s statements about the status of the military.

“I’m distressed by comments coming from [Trump],” said Warner. “We have the strongest military in the world. It is not in shambles. The Pentagon is still as vibrant as the day I left there … And no one should have the audacity to degrade the Purple Heart or military families. That's wrong.”

Kaine praised Warner’s years of service in the military and in politics.

“People are often cynical about politics and wonder if [opposing politicians] can be friends,” Kaine said. “John Warner is what [politics] should be.”