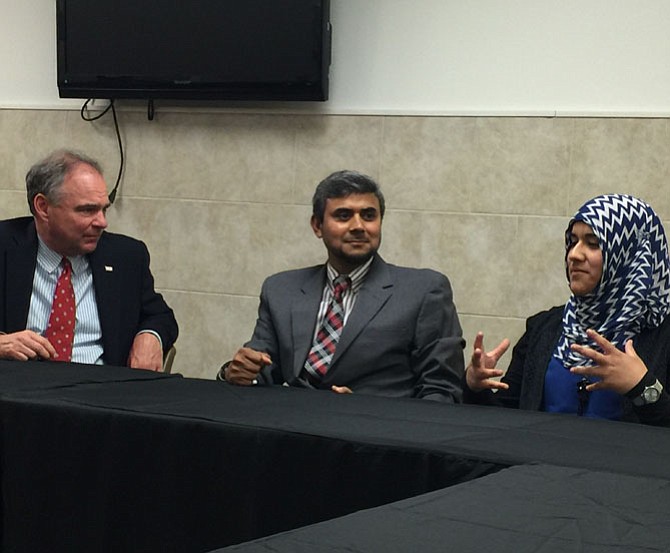 Sen. Timothy M. Kaine (D-VA) listens to student Hidayah Martinez Jaka, who talked about her personal experiences with intolerance and prejudice towards Muslims, during a roundtable discussion Kaine hosted with leaders of the Northern Virginia interfaith and civil rights communities on Thursday, July 21 at the All Dulles Area Muslims Society (ADAMS) Center. Photo by Victoria Ross. 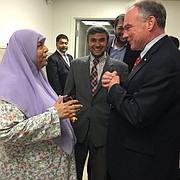 Sen. Timothy M. Kaine (D-Va.) receives a warm welcome from Sanober Yacoob (left), an executive staff member of the All Dulles Area Muslims Society (ADAMS) Center, and Syed G. Moktadir (center), president of the society, as he enters the center to host a roundtable forum with leaders of the Northern Virginia interfaith and civil rights communities on Thursday, July 21.

Trailed throughout the day by a phalanx of political reporters, Kaine remained relaxed, composed and engaged (but never boring) during his two events.

While the first event – a roundtable discussion on immigration in Arlington - was closed to the media, the second event on religious freedom and civil rights held at the All Dulles Area Muslim Society (ADAMS) in Sterling was open to the press, and dozens of reporters, representing nearly every prominent media outlet, planted themselves in one of the conference rooms at the center, setting up cameras, adjusting boom microphones, juggling tripods and waiting.

“Why don’t they talk to us?” asked 13-year-old Faateha Syed, a young Muslim woman from Reston, who seemed baffled as the media throng descended on Kaine as he entered the room.

“They’re not here for us. They’re here for him,” an older Muslim woman replied. “They want to know if Senator Kaine is going to be our next vice president.”

Despite the intense media scrutiny and political speculation swirling around Kaine, roundtable participants said they were impressed by Kaine’s focus and genuine interest in them and their concerns.

“He gave each of the panelists here a voice to talk about the issues confronting Muslims,” Moktadir said. “The ADAMS Center has a history of openness, moderation and civic engagement. Senator Kaine did a great service highlighting the importance of tolerance and religious freedom.”

During an interfaith and civil rights roundtable discussion hosted by Sen. Timothy M. Kaine (D-VA) at the All Dulles Area Muslims Society (ADAMS) Center last week, Phillip Thompson of Fairfax, chair of the Northern Virginia NAACP, talks about Black Lives Matters and says he is deeply troubled by the recent spate of police-related violence. Johnson is seated next to Faateha Syed (left), a 13-year-old ADAMS member and Joan Bell-Haynes (right), pastor of United Christian Parish in Reston.

DURING THE FORUM at ADAMS, Kaine took the opportunity to extol Clinton’s virtues and assail Republican Presidential candidate Donald Trump’s policies and prejudices – without once saying Trump’s name.

When discussing bans on Muslims entering the United States and mass deportations – two of Trump’s policy promises – Kaine asked the group: “Do you want a trash-talking president or a bridge-building president?” He noted that he and his Democratic colleagues in the U.S. Senate, “beat” a bill that would have greatly tightened screening procedures on refugees from Syria and Iraq, essentially banning them from entering the U.S.

“So the refugees are our enemy now? We shouldn’t tolerate intolerable prejudice,” Kaine told the group. “The bottom line is that it’s not easy to come into our country as a refugee, at all. But the notion of ‘no Syrian can ever come here’ is antithetical to our values – especially when the innocent civilians and families seeking refuge in our country are fleeing the very violence and terror we saw in France and Lebanon that they experience every day in Syria.”

In addition to discussing the plight of refugees, Kaine delved deep into the hot-button issues of police profiling and Black Lives Matter. He noted the success Richmond had with strategies like community policing rather than zero-tolerance policies that surfaced after 9-11.

“I'll tell you one little insight…One of the best things we did (when I was Mayor of Richmond) was hire a police chief who had the idea of community policing, who said ’let's put officers on bicycles…let’s make them part of the community… We don't have to recreate the wheel, we have the model.” 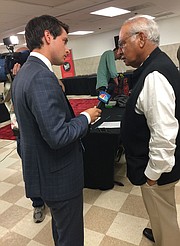 Mohsin Alikhan, president of the McLean Islamic Center, talks to a reporter after an interfaith roundtable forum hosted by Sen. Timothy M. Kaine (D-Va.) at the All Dulles Area Muslim Society (ADAMS) center on Thursday, July 21. During the forum, Alikhan asked Kaine whether he would still visit the center when he’s vice president. Kaine, who had not yet been tapped as Hillary Clinton’s running mate, smiled and said that he would visit “regardless of title.”

But unlike the famous real estate mogul on the other side of the political aisle, Kaine said, he believed our nation becomes greater by unity, not more division.

"Do we pull together as a nation or try to divide the nation? Virginia has some history with divisiveness, but when we started a change in Virginia and put [divisions] behind us and started to let everybody be around the table, we started doing really, really well. And that's what's at stake here in this election."

When Joan Bell-Haynes, pastor of the Reston United Christian Parish, asked Kaine what people in the room should do to help the country get past its racial and religious divisions, Kaine said he was supporting Hillary Clinton, and called her the kind “bridge-builder” that we need.

AT TIMES, Kaine was giving mini history lessons on the First Amendment and Freedom of Religion. He also showed his philosophical, thoughtful side, relating a story about one question he often asked as a Jesuit missionary in Honduras.

Although Kaine did not invite discussion of the VP buzz surrounding him, several participants noticed a sign behind where he was seated that read: “What if someone from your community became a national figure? In America anything is possible.”

Mohsin Alikhan, president of the McLean Islamic Center, asked Kaine whether he would still visit when he’s vice president.

Kaine shook his head, and humbly answered “Of course I’ll come…regardless of title.”

After the event, Kaine took media questions, but deflected any speculation about his chances as Hillary Clinton's pick. He did tell the press pack, however, that "I'm being considered because of Virginia. Virginia Matters."