What to Know about Affordable Housing in Alexandria
Votes

What to Know about Affordable Housing in Alexandria 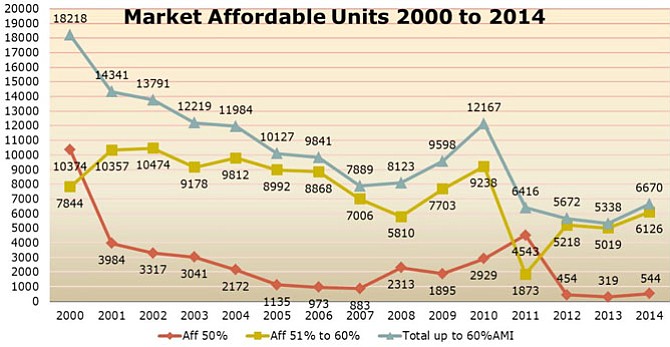 A second grade teacher in Alexandria public schools makes roughly $22 per hour. A first-rank police officer in the city earns $23 per hour. According to the Alexandria Office of Housing, the average wage needed to rent an apartment in Alexandria is $30.50 per hour. As housing costs continue to rise, Alexandria’s firefighters, bus drivers, social workers, and countless other professions are being pushed out or forced to pay rents that exceed their affordability.

According to Helen McIlvaine, director of the Office of Housing, 70 percent of Alexandria’s population spends more on their homes than what is considered affordable. According to McIlvaine, the national standard is that a household should not spend more than 30 percent of their income on housing.

“There are other factors we look at,” said McIlvaine. “For units near a Metro, 40 or 50 percent might be better.”

“At higher incomes, usually a household can afford to spend more [than 30 percent] on their house,” said Keeler.

But throughout the city, the pockets of affordability are getting smaller and smaller.

“We saw rents go up in Beauregard again,” said McIlvaine. “It’s a desirable place. In that corridor, people spending 70-80 percent of their income on housing. Generations of families pooling housing resources. It’s a shock how much people spend on homes.”

Keeler said one of the biggest challenges for the office of housing is the one-year renewal leases for Section 8 public housing that has neared the end of its affordability period. These are properties that were set to have committed affordable units for a certain number of years and past that year can renegotiate their affordability.

“We’re keeping track of those and trying to know if we’re coming up on one,” said Keeler.

At Fox Chase, Keeler said 423 affordable units in that complex could have the apartment affordability renegotiated within the next few years. The loss of Fox Chase and properties like it would be especially damaging for Alexandria’s affordability because Keeler says many of the tenants of the building are at the lowest income bracket, less than 30 percent of the area median income. Keeler said the Claridge House, a 300-unit residence which provides for elderly residents at lower income levels, is also facing affordability renegotiation within the next five years. Two hundred similar units are scattered across Old Town. In total, Keeler said one-third of the current committed affordable housing units could face expiring affordability.

The set-asides are committed affordable units built in cooperation with various for-profit and non-profit developers. For-profit developers contribute housing as part of the city’s bonus density program. If a building developer wishes to exceed their by-right development limitations, such as adding height onto a building, the developer can contribute one-third of the bonus space in housing either on-site or as an equivalent cash contribution to the city’s Housing Trust Fund. Twnety-four set-aside units have been built since 2002 as part of the bonus density program.

But according to McIlvaine, the majority of the new affordable housing comes through collaborations with non-profits like the Alexandria Housing Development Corporation (AHDC). How these projects get made is complicated and can vary from site to site, but McIlvaine said Jackson Crossing provides a view of how new affordable housing is typically brought into the city.

Jackson Crossing, a housing project that provided 78 units set at 60 percent AMI for 60 years, cost $24.5 million to develop; $12.2 million of that cost, nearly half, comes from “low income housing tax credits.” According to McIlvaine, the Virginia Housing Department Authority awards tax credits to a project which investors buy, providing the development with funding. McIlvaine said investors buy the tax credits to offset tax liabilities, so a business with high profits can offset their tax costs by investing in affordable housing, or banks can buy credits through the Community Reinvestment Act.

“Most companies work through syndicators. Lots of groups, including Capital One, invested in Jackson Crossing,” McIlvaine said.

A housing developer, like AHDC, competes for tax credits from the state based on whether or not the project meets certain requirements, like whether or not the project is close to public transit or whether the development plans are at least 60 percent completed. Certain categories are able to net higher points based on the state’s housing needs and priorities. Having a community room, for instance, is only worth five points while having exterior walls constructed with brick is worth 22 in the 2016 Qualified Application Plan (QAP).

Jovovic said including lower income populations with rent subsidies will help housing projects attract more tax credits. One new pilot program in development at the Office of Housing will push the local rental subsidies to support a lower income population. Rental subsidies help a person at incomes substantially lower than the area median afford their rents. Currently, rental subsidies support households with incomes between 40 and 60 percent of the area median income. For a single person household, that range would be from $30,440 to $45,660. The new pilot program would maintain the same number of subsidies, but focus more towards households at 30 percent area median income, $22,850 for a one-person household.

To maintain current numbers of rent subsidies provided to lower income Alexandrians, McIlvaine said the Office of Housing is going to need play debt collector. In 2006, McIlvaine said the city began heavily investing in affordable housing properties. The city provided loans with the agreement that properties would begin paying those back to the city once the other debts and financial obligations of the project had been met. Jackson Crossing, for example, received a $2.5 million loan.Those repayments were expected to start no sooner than 10 years after the projects were opened, and McIlvaine said the city is coming up on that time for several properties across the city.

“There’s been [almost] no repayment yet, but in the next year we’re doing a deep dive to see what loans are out there,” said Keeler. “Our next step is going to be our asset manager meeting with property owners [to look at those loans].”

“We want to remind the non-profits we loaned to that those fees are due,” said McIlvaine. “We also want to remind them that they have been accruing interest and it could be helpful to begin repaying that. This could be a significant revenue over time.”

Keeler said there are no current estimates on how much revenue those loans might return to the city or when that collection would start.

“As our properties start to earn cash flow, we fully expect to start repaying those loans,” said Jon Frederick, executive director of AHDC. “It’s hard to say right now when we will start having that cash flow.”