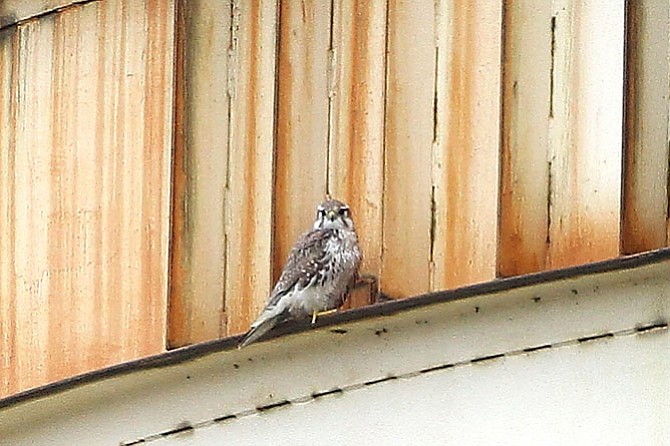 A Prairie Falcon perched on water tower at old power plant in Alexandria on March 25. The white “supercilium” (eyebrow) over the eye and dark moustache marks on side of face are diagnostic for the bird. Photo © Donald Sweig

Prairie Falcon flying near old power plant in Alexandria on March 25. The very dark plumage under the wing in the armpits near the body (axillaries) are a reliable identifying mark for this bird.

It would not have caused any particular notice in Flagstaff, in Santa Fe, in Boise, or elsewhere in much of the American west, but when a Prairie Falcon (Falco mexicanus) was found and reported in Alexandria on Saturday, March 25, it was a "Big Deal."

The bird was first spotted about 10 o'clock in the morning by a local D.C. birder, who was walking along the Mount Vernon bicycle trail near Tide Lock Park, looking for ducks and other waterfowl. As he was passing or approaching the now inoperative NRG Potomac River electrical generating plant, he noticed a bird perched on one of the outside structural beams. Apparently, not quite sure that he saw what he thought he saw, he immediately texted/posted it to a local birding group. Within just a few minutes, other birders arrived and observed the bird, decided it was what they thought it was, and at about 10:30 posted it to Va-Bird, the Virginia birding listserv, sponsored by the Virginia Society of Ornithology. This was an unprecedented ornithological sighting, not only for the City of Alexandria, but for all of Virginia, Maryland, the District of Columbia and much of the eastern United States. Indeed, this is an uncommon bird everywhere; even in the millions of acres of its normal range in the western states, there are only about 4,000 to 6,000 known pairs.

By around noon on Sunday, March 25, numerous other birders had arrived, confirmed the identification and posted ID photos to E-Bird, the birding database operated by the Cornell Lab of Ornithology. At this point, birders and other interested folks began to descend on the power plant from far and wide. By 10 o'clock on Sunday morning March 26, there were a dozen or more people there with expensive binoculars, telescopic spotting scopes, and cameras with telephoto lenses looking at and photographing the falcon. About half of the observers were standing near the entrance to the plant at the intersection of Bashford Lane and N. Royal Street. The other half were out on the berm above the bicycle trail looking at the plant from the river side.

During the next two hours, another dozen or so folks came and went, and the bird was putting on what one of the observers described as a "really good show." The falcon was harassing or being harassed by a number of the local crows, and was engaged in any manner of aerial maneuvers and antics with the local birds. This bird can really fly, it's a falcon after all. The falcon was seen by numerous additional people on Sunday, and continued to be seen, sometimes sporadically, throughout the week of March 27 to April 1. It was observed perching, flying, and eating various prey species, such as sparrows and starlings. Surely, hundreds of people have come to see the falcon, from as far away as Cape Charles at the southern end of Virginia's Eastern Shore, Virginia Beach, Lynchburg, North Carolina, and who knows where else. The E-Bird rare bird alert (these are the serious birders) has well over 100 postings. A Prairie Falcon in Alexandria is a "Big Deal Bird!"

There's no way of knowing exactly where it came from, why it's here, or how long it might stay. If one wants to go look for the falcon, the best place to look is probably near the gates of the old power plant at the Intersection of Bashford Lane and N. Royal Street.

The bird often perched on one of the two rings, near the top of the two yellow holding tanks on the south side of the building. One will need binoculars or a spotting scope to see the falcon. There are likely to be other people there looking as well, which is often a help in finding the bird. Recent reports suggest that early in the morning before 8 or 9 a.m., and in the late afternoon between 5:30 and 7 p.m. might be good times to see the falcon.

There's no telling if, when, or where the bird may be. But it's a rare and unprecedented opportunity to see this really wonderful bird without having to get on an airplane and fly across the country.

Best of luck if you go to look.

Donald Sweig is a local birder, naturalist, and photographer, who is an occasional contributor to the Gazette Packet.