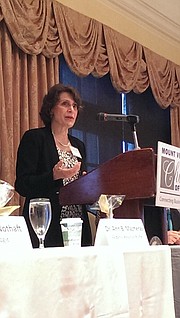 Dr. Ann Battle Macheras with the Federal Reserve Bank of Richmond broke down the modest, yet continued growth in real domestic GDP since 2009 — the average has been 2.1 percent. 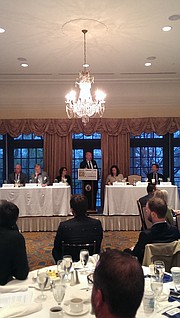 Center, Dr. Terry Clower with the GMU Center for Regional Analysis, agreed that job growth should continue, albeit moderately, with rebalancing in the contract sector of jobs from Sequestration.

As recovery from the Recession continues, there is still uncertainty around federal spending and President Donald Trump’s proposed budget. Rising interest rates, the northern Virginia housing market and employment patterns in the region were among the presentations at the April 6 Economic Outlook summit hosted by the Mount Vernon-Lee Chamber of Commerce and Southeast Fairfax Development Corporation.

Business and community leaders filled the banquet space on the side of the Belle Haven Country Club for the morning meeting, which was guest-moderated by Rebecca Cooper, senior writer for the Washington Business Journal.

Cooper opened by citing a number of trends she said are “good news for retail space.” She said she’s seeing an increase in specialized fitness, such as indoor play spaces and swim schools, as well as more temporary uses like pop-up shops.

When a space hosts something like a popular weekend maker-market, Cooper said “suddenly,” that retail area “is the place to be.”

Cooper also noted the rise in food businesses mixed into shopping centers. Retailers should be pleased, she said, because eateries increase customers’ ‘time on premise.’

Dr. Ann Battle Macheras with the Federal Reserve Bank of Richmond broke down the modest, yet continued growth in real domestic GDP since 2009 — the average has been 2.1 percent.

One of the biggest drivers, she said, has been Personal Consumption Expenditure.

Productivity and workforce growth are also factors in the moderate growth; Macheras said Virginia’s employment is comparable to the U.S., and both are expected to slow in the next few decades.

Clower agreed that job growth should continue, albeit moderately, with rebalancing in the contract sector of jobs from Sequestration, a theory he said was “bounce-back equilibrium.”

Among the 15 largest job markets in the country, he said, Washington, D.C., ranks in the middle in job change from February 2016 to 2017. That’s just behind Miami and ahead of Detroit. First in growth over that period was Atlanta, followed by Dallas and Seattle.

Staltzer gave an overview of Fairfax County’s $7.59 billion budget. The FY2018 budget was the subject of three days of public hearings the week of the April 6 summit.

The county’s tax rate would remain steady, Staltzer said; it had been made, but not formally adopted yet.

Nothaft, speaking on the housing market, said prices are up in 2017 — 5 percent in the U.S. and just 3-4 percent in Fairfax County — as are rents.

Mortgage rates are still historically low, he said, but are also increasing. A 30-year fixed-rate mortgate, Nothaft presented, is forecast to reach 4.6 percent by December this year.