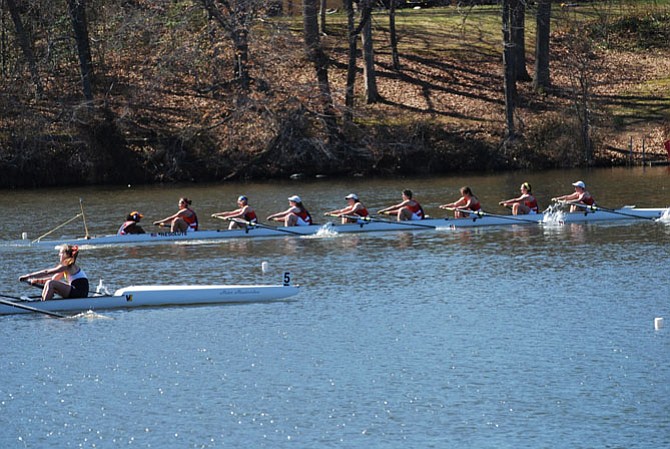 The T.C. Williams girls’ crew team put in a virtuoso performance, winning every race in which they participated, in the Noxontown No. 3 Regatta in Middletown, Del., on April 11.

The Titan girls faced tough competition at the Noxontown No. 3 Regatta, which hosts some of the best boats on the East Coast. While the TC team finally saw some sunshine after two weeks of poor weather, high winds continued to be a factor for many of the races.

The girls’ lightweight 8 pulled out a last-minute victory over Merion Mercy, a school that has been a top contender nationally in the lightweight category for several years, with a time of 5:35.4. This is the second major victory for the TC boat in two weeks, as it beat the boat from three-time national champion Holy Spirit last week. Members of the TC lightweight boat include Elizabeth Roda (cox), Rachael Vannatta, Olivia Anthony, Sierra Arnold, Abby Prall, Sarah Scroggs, Caroline Hill, Emily De-Bodene, and LeeAnn Richards. The lightweight 8 is guided by coach Jaime Rubini.

Competing in Bull Run, the T.C. Williams boys’ crew team had a strong and productive scrimmage against Westfield and Washington-Lee. The scrimmage, which consisted of two-three 1500m pieces for each boat, was held at Westfield's Bull Run facility. The TC boys rowed a lightweight 8, varsity 4, freshman 8, and two novice 8s against different combinations of Westfield and Washington-Lee crews. The race pieces were organized to foster close and competitive racing and tight finishes, which is just how they played out.

The morning was sunny, cool and windy, which made for some bumpy conditions similar to the rest of the spring.

The Titan oarsmen and oarswomen will bring the competition to Virginia next weekend, competing at the Smokey Jacobs regatta in Occoquan. This race should serve as a good indicator of the team's prospects at the upcoming state championships.