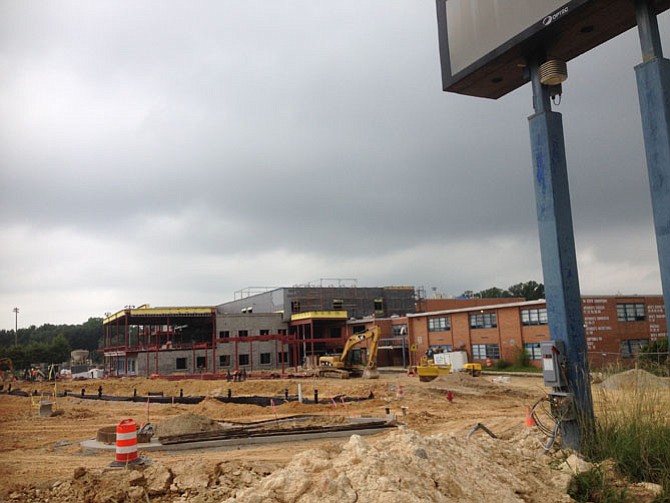 When the renovation is complete in two years, there will be upgrades and an increase in capacity. Photo by Mike Salmon. 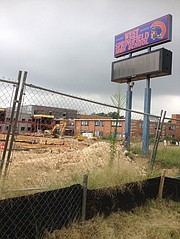 From Rolling Road, the school looks like it’s under a complete makeover.

Springfield High School throughout the years have taken a toll on the structure, so it is being renovated for the second time in the school’s history to meet the demand.

The school is in the first phase of a $75 million, four-year project and nearly one-third the way through the complete project. Phase I is impacting 50 classrooms in the math and social studies departments, and this requires 54 trailers that are nearly a quarter mile away from the main building in the practice field behind the school, in a quad they’ve named “Sparta.” According to the principal, Michael Mukai, “the kids have done so well, resilient,” he said.

THE WORK is being summed up every few weeks in the online blog “WSHS Renovation Update.” The July 2017 entry looks at the progress on the sports lobby, new music wing, cafeteria windows and surrounding curbs and gutters, with all going as planned, it says. “All around the perimeter of the school, work is being done to prepare roadways, curbs, gutters and sidewalks for the start of the school year,” the play-by-play caption read. These captions were compiled by Becky Brandt, the Fairfax County Public Schools’ Renovation Liaison. “The music hall will have four incredibly beautiful spaces for our guitar, choral, orchestra, and band programs,” Brandt said. The renovations included an auxiliary gym with a new wood floor, windows, retractable hoops and mat racks. The resilience that Mukai referred to has been adopted by everyone. Since the auditorium is being renovated as well, the drama program will use the new wrestling room to practice for their fall play.

Historically, “Sparta,” was a prominent city-state in ancient Greece, a main settlement on the banks of the Eurotas River in Laconia, and around 650 BC, it rose to become the dominant military land-power in ancient Greece, according to Wikipedia. In West Springfield, “Sparta was created – with over 50 classrooms, bathroom facilities with hot and cold running water, an administrative trailer and water stations,” the renovation update stated. Naming it Sparta “just seemed natural,” with the Spartans as the school moniker, said Brandt, “I believe our [Director of Student Activities] Andy Muir coined the phrase.”

Getting to Sparta sometimes requires umbrellas on rainy days, said Mukai. “We faced some challenges,” he said. Building a structure or road while it’s in use brings up challenges of its own. “We will all need to get used to new traffic patterns as construction work continues in and around the sports lobby,” added Brandt.

Currently, there are 14 elementary schools in Fairfax County that are being renovated or are in the planning stage, three middle schools, and Herndon High School and Oakton High School. Additions, not full renovations, are being made to West Potomac, South Lakes, Stuart and Madison High Schools.