Doors Open at West Springfield on First Day of School

Some trailers are gone but construction continues. 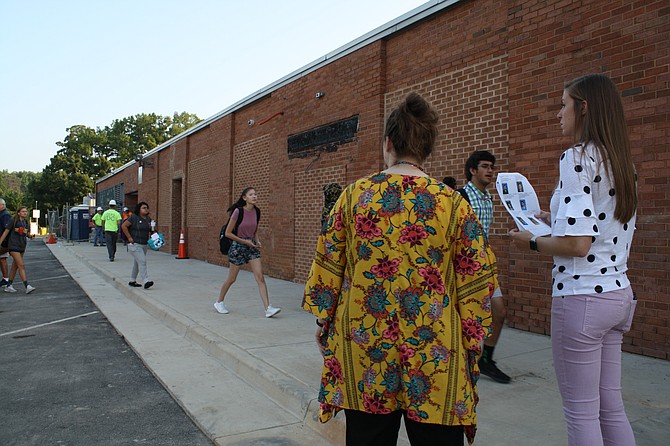 West Springfield teachers monitor as students file in on the first day of school. Photo by Mike Salmon.

Springfield — It was a busy summer for the construction crews at West Springfield High School doing the renovation, but now that the summer is coming to an end, the

Buses pull up at West Springfield High School for the first day of school.

students filed in on the first day on Aug. 28.

“We don’t have kids down in the trailers anymore,” said Bill Langloh on the security staff. His station last Tuesday morning was out back where the buses unload.

That seemed to be the feeling with all the staff. “All of our teachers will finally be under one roof,” said photography teacher Dorothea Swaggart.

To some of the students, it didn’t really seem like that much of a big deal. Sydney Anderson, 17, and Sam McQuiston, 16, got there early, sharing some of their summer stories with each other. “I want to get out of my house early to get the day over with,” said McQuiston.

The $75 million renovation is more than halfway completed and the trailers that everyone was talking about were in an area called “Sparta,” keeping with the West Springfield Spartans theme. Included in the renovation is a new entry, which isn’t right on Rolling Road like the old entrance, and new technologically improved classrooms. The renovations are scheduled to be completed in 2021.

Mason Melear locked his bike up by the new front door, and plans to ride to school every day like he did last year. Biking to work is faster than the bus, he

Sydney Anderson and Sam McQuiston waiting for the doors to open.