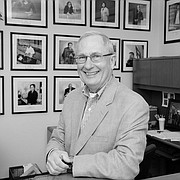 Tim Elliott, a former School Board chair and 2011 Living Legend of Alexandria, died Aug. 17 at the age of 78.

“For as long as I can remember Dad was all about service to the community.” — Farar Elliott

“I keep my fingers in the pie and that keeps life sweet,” Elliott said when named a Living Legend of Alexandria in 2011.

Elliott also served on the City Manager’s Small Business Task Force and represented the OTCA on the Woodrow Wilson Bridge Task Force. In the 1970s, he was one of the plaintiffs in a suit against the City of Alexandria to prevent the construction of high rise apartment buildings along the Potomac River where Founders Park now stands.

“I definitely got my sense of serving the public from my Dad,” said Elliott’s daughter Farar, who works as a curator for the U.S. House of Representatives and has worked with nonprofit organizations. “I got my love of the arts from my mother but for as long as I can remember Dad was all about service to the community.”

Born Timothy Schuyler Elliott on Sept. 19, 1938, in New York City, Elliott moved with his family to Burke and then Oakton, where he met his wife Page on the school bus. Elliott graduated from Fairfax High School in 1956 and Brandeis University in 1960, where he was a member of the undefeated 1959 College Bowl team. He graduated from Harvard Law School in 1963.

After serving in the Army for two years, Elliott spent 10 years with IBM in its New York and Washington legal offices before joining the U.S. Department of the Interior.

Elliott’s career in the Department of the Interior’s solicitor’s office was celebrated by two Presidential Distinguished Service awards (under Presidents George H. W. Bush and Bill Clinton); he served under 10 secretaries and served as acting Solicitor during three Presidential transitions, from President Ronald Reagan to President George W. Bush.

Elliott also represented the Department of Interior during the five official investigations into the suicide of Deputy White House Counsel Vincent Foster and also congressional and Special Counsel Kenneth Starr's investigations of Interior's decision to take land into public trust on behalf of three Indian tribes attempting to create a gambling casino outside American Indian territories. Elliott and Interior denied the tribes' application.

During Elliott’s two years as chairman, the School Board created the celebrated nonprofit Scholarship Fund of Alexandria. Now in its 31st year, the fund has raised more than $12.5 million to help send almost 4,300 T.C. Williams High School students to college.

Elliott also was one of the early 1970s soccer coaches for the Alexandria Soccer Association's Old Town teams. ASA's Old Town soccer teams were among the first on the East Coast to include girls and African American players.

“I’m not sure how he found the time but Dad always coached our soccer team,” said Farar Elliott.

“At the time, every kid on the ASA teams had to play two of the four quarters no matter their skill level. When dad saw that some opposing teams were only playing good players, he got into quite an argument with another coach, who threatened to shove Dad’s ever present cigar down his throat. The kids loved that Dad would go to the mat for them and had a t-shirt made up with the phrase “How can you coach with a cigar down your throat?’ That t-shirt was one of Dad’s most prized possessions.”

Elliott and his wife, Page Martin Elliott, were 42-year residents of Old Town. She survives him, as do three children and six grandchildren: Farar Elliott, who lives with her spouse Ruth Trevarrow in Washington, D.C., with daughter Adelaide Elliott-Joy; Schuyler Elliott of Jacksonville, Fla., and his children Conner, Carter and Reed Elliott; and Espedito Gasparo, who first joined the Elliott family as an exchange student in 1986 and now lives in Fairfax County with his children Julian and Daniel Gasparo.

A memorial service will be held on Friday, Aug. 25 at 11 a.m. at St. Paul’s Episcopal Church at 228 South Pitt St. A reception will follow. In lieu of flowers, the family requests donations to the Scholarship Fund of Alexandria.

“Anyone who knew Dad knows that he could be stubborn in his pursuit of fairness,” Farar Elliott said. “But he was also very good at listening and more than wanting to win, Dad was always more concerned with doing what was fair and right for the community. He truly loved Alexandria and loved serving in any way he could.”