Forum on Independent Oversight of Police

Two new forms of independent oversight of police are now in place. 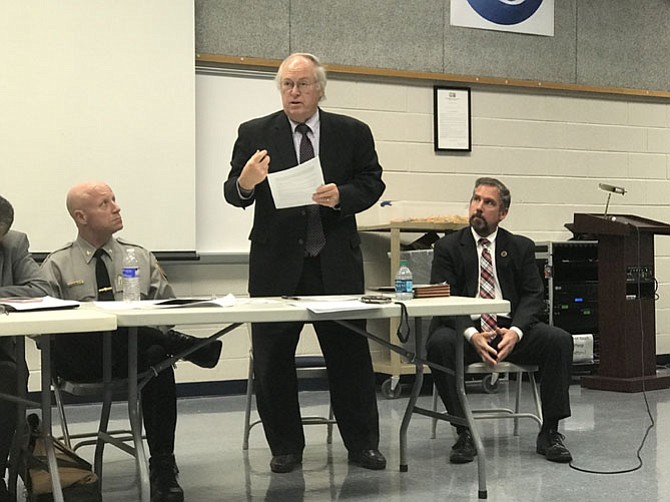 Adrian Steel of McLean explains the workings of the Civilian Review Panel while Police Chief Edwin Roessler and Independent Police Auditor Richard Schott look on at a Mount Vernon meeting in November. Photo by Mary Kimm.

Police Practices Review Commission and established the first independent oversight of law enforcement. Now both the Civilian Review Panel and the Office of the Independent Police Auditor are up and running.

A forum on Dec. 12 in Reston will give people a chance to find out more and how they can make use of these new resources.

“The panel and the Independent Police Auditor were established by the Board of Supervisors to enhance police legitimacy and to build and maintain trust between the police, the Board of Supervisors and the public,” said Adrian Steel, who is chairman of the Civilian Review Panel for its first year. “Civilian oversight will also help ensure transparency and accountability as to FCPD activities.” Steel also served on the Ad Hoc Police Practices Review Commission on both the independent oversight and use of force subcommittees, before being appointed to the review panel.

Richard Schott, a 27-year veteran of the FBI, began as independent auditor on April 17, reporting directly to the Board of Supervisors.

Schott has several Fairfax County issues on his plate already, including the officer-involved shooting 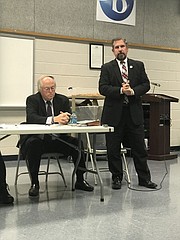 death of a Herndon resident in January, the violent arrest of a man at the Annandale Parade Oct. 28; and racial disparities in use of force by Fairfax County Police.

The Civilian Review Panel recently received a request to review a case that has already been investigated by the Fairfax County Police. The Police Civilian Review Panel would review the investigation for accuracy, completeness, thoroughness, objectivity and impartiality. The panel procedure would be to hear from the complainant and walk through with members of the community how the investigation was conducted, including findings of fact, evidence collected and witness statements, according the CRP website.

The Civilian Review Panel will hear concerns and complaints relating to FCPD abuses of authority or serious misconduct, Steel said. “Examples would include the use of abusive racial, ethnic or sexual language, harassment or discrimination, unnecessary rude, angry or threatening conduct, and reckless endangerment of a detainee.”