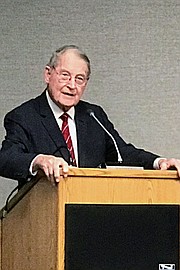 Former director of the FBI and CIA, Judge William Webster addressed inaugural meeting of the Civilian Review Panel on Monday, March 20 about the importance of civilian oversight.

Judge William Webster and Adrian Steel, chairman of the inaugural Civilian Review Panel. Steel was special assistant to Webster at the FBI.

The nine members of the Fairfax County Civilian Review Panel were sworn in at the panel’s inaugural meeting on Monday, March 20.

Judge William Webster, former director of the FBI and CIA, spoke on the importance of civilian oversight of law enforcement. “Civilian oversight is important in a country where we want people to feel safe,” Webster said. He urged panel members to consider the promise he made when he joined the FBI: To do what the citizens expect in the way that the Constitution allows.

“This is historic,” said Sharon Bulova, chairman of the Board of Supervisors. “The creation of this panel and the creation of the independent auditor position were two of the primary recommendations of the Ad Hoc Commission.”

Bulova appointed the 30-member Ad Hoc Police Practices Review Commission in October 2015 in the wake of public concern after the police shooting death of John Geer in August 2013. The commission, which included full participation of the Fairfax County Police Department, made 140 recommendations, most either already implemented or in process.

FCPD Police Chief Edwin Roessler pledged his support to the panel on Monday, saying that it would help “build upon the trust the public gives us.”

The Civilian Review Panel will act as an independent avenue for residents to submit complaints concerning allegations of abuse of authority or misconduct by a FCPD officer. The panel will have the authority to request and review completed Police Department internal administrative investigations regarding a civilian complaint against an officer. The panel may hold public meetings to review police administrative investigations and walk through with members of the community how the investigation was conducted, including findings of fact, evidence collected and witness statements.

The Civilian Review Panel will not address use of force by police that results in serious injury or death; those will be monitored by the newly hired Police Auditor, Richard G. Schott.