A Conversation: Getting Back on the Porch in Alexandria
Votes

A Conversation: Getting Back on the Porch in Alexandria 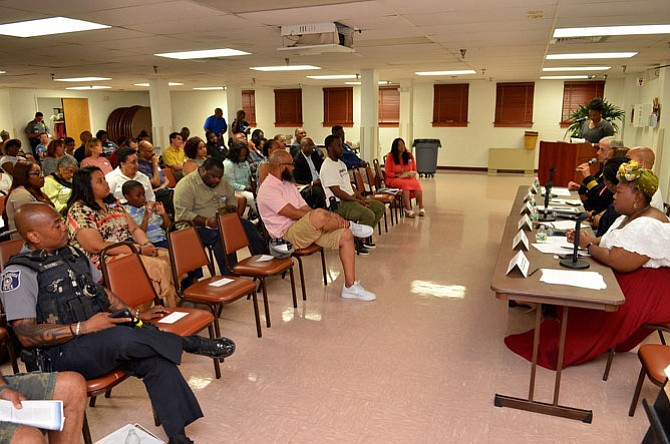 Residents and police interact at a police community forum hosted by Alfred Street Baptist Church. The church wanted to create and open dialogue to ensure that what happened in Ferguson, Mo. wouldn’t occur in Alexandria.

Alfred Street Baptist Church has been an Alexandria fixture for over 200 years. The city’s largest black church, it boasts some 8,000 members and over 80 ministries. The nationally renowned Rev. Dr. Howard-John Wesley, described on the church’s web site as “not afraid to take on social and political issues,” has been pastor since 2008. This writer, a Catholic layman passionate about the role of religion in public life, had a conversation (edited below) with Wesley to learn about his church’s vision and activities in that regard. This is the second in what intends to be an ongoing series of interviews with local religious leaders about religion in the public square.

“The Catholic Church has a pretty robust ‘social doctrine’ — a theological basis and then guiding parameters about how to engage in political, social and economic life. Does your tradition have a developed doctrine of that sort?”

Welsey: “… If you see how and why black churches were shaped and formed, they weren’t just about religion. It was the only safe and sacred space for black people … So out of black churches were birthed black colleges, … businesses, … newspapers, … banks. And those are core pieces of black life. … And so any black church that is not engaged in society, and equipping members for that, I think has disengaged from its heritage and its rooting. So for the black church, to ask if there’s a defined doctrine, the answer is almost ‘no,’ because it’s just inherent in who we are …”

“There’s been a lot of gentrification [in Old Town] … There’s still this African-American faith community there, but … the community has diverged … Can you say a little more specifically, in the context of this place, what you see the black faith community doing, in terms of the engagement with schools and businesses and press?”

Wesley: “… Gentrification, for me, although [it] can be a great benefit to the city, typically dispossess the poor; it becomes ‘economic-ism.’ And typically people of color are on the back end of that. So we, as our church, are committed to a few things that we believe help preserve black presence here in Old Town. … We have now entered into a memorandum of understanding with the city that we are a partner in preserving affordable housing in this area. … And I think that’s critical for families [who] … don’t want to leave … Our internal programs continue to cater to families with lower incomes … [For example,] our tutoring program on Mondays — we have about 300 kids … and those aren’t our church kids, those are kids from the neighborhood. …”

“Does the congregation here have a structural means of [engaging city politics] …? Do you maintain personal relationships with City Council members, School Board members, ARHA commissioners?”

Wesley: “We do have a social justice ministry, as well as our communications team, which keeps an eye on what’s happening in Alexandria through the press and through public documents … Yes, we maintain relationships, particularly through the mayor. … We are the largest church in Alexandria. And so, you want the black vote in Alexandria? You’re going to have to come through Alfred Street. … That’s how we hold sway … We also have members of our church who sit on City Council, who sit on school committee, and they’re the ones that get in my ear … Some older members of the church who are long-term Alexandria residents [serve as] … our own internal ‘intranet’ …”

“What are some of the key local issues related to the poor?”

Wesley: “… We start with the housing, that’s major for us. Dealing with the homeless issue. … You’d also be surprised at the number of financial requests we get for aid and assistance from non-members who are struggling with bills … The STEM issue in a lot of our public schools … We have partnered with Hybla Valley Elementary School, where … we’re helping to donate to build their science lab to be certain that that school — which is predominantly Hispanic and black and predominantly free lunch, … — that they don’t fall behind from the private schools …”

“There’s a lot happening with public schools that I would imagine is going to shape the public education landscape here for decades if not generations to come. That’s a pretty decisive moment, it seems like to me, in terms of evangelizing the local culture … What are some of your thoughts about that?”

Wesley: “… I know some of the challenges with TC. … But we also fear what will happen if you create a new elite school, that you’ll see this segregation again. Definitely aware of that. But I didn’t understand the question [about cultural evangelization].”

“The Catholic Church has a [principle of] … ‘leavening’ the secular institutions and spheres to help them to become what they ought to be doing. How does the market, how does education, how does the media, how does politics become ordered to the valid purposes that God intended for them?”

Wesley: “Part of the challenge of course, being a religious institution … you get the outcry, parental as well as political: ‘church and state, you guys are supposed to be separate.’ What we have done that I think makes a major difference is, I believe in the ‘ministry of presence.’ … At TC our men’s ministry [does] … a mentoring program that has nothing to do with religious education; it has to do with life skills … The biggest thing we can do is just get faces in the place, and hopefully our presence as men and women of faith, who are not trying to push faith on you, but it’s a light in the midst of that circumstance or situation. …”

“Have you discerned a really constricting church-and-state anxiety here in this city?”

Wesley: “No, and I think it’s because the church isn’t always about proselytizing and evangelizing. The church is about having a presence and a voice for justice and for the poor and for the oppressed. … You want to see God furious with God’s own people? Look at God’s people neglect the poor among them. … The hungry want to be fed; the naked want to be clothed; the incarcerated want justice. And so I think that that’s our primary voice. … When you stand on those issues … I don’t have to hide that I stand as a Baptist preacher. You know that; but that doesn’t mean I’m also not a citizen and that I should be exited out of the room. … There are some great social service organizations in Alexandria; Alfred Street is one of them. … Which means we’ve earned the right to sit at some tables, … to be heard on some issues, … to raise our hand in support or objection …”

“Are you part of [the mayor’s] clergy council?”

Wesley: “Yes. And I think there’s room for that group to do a little bit more. And I don’t think it’s the fault of the mayor … Religious institutions are so disjointed. … In civil rights, it was white clergy that helped push it over the edge. Black clergy were behind it; but … when you see white clergymen and Jews and Catholics marching beside King, it made a whole different statement. I don’t think there’s anything that’s generative of that type of bonding of clergy today in this city. And that’s kind of lamentable.”

“Are there any key injustices … that you think could serve as a local vehicle … for that kind of bonding?”

Wesley: “The big elephant in the room in Alexandria is still just affordable housing. And too many churches aren’t engaged in that, don’t see it as their cause. … I don’t see an issue right now on the table that draws us together. …”

“There is a moral authority that comes with [the injustices the black churches have faced] that is kind of unique. … Do you think that there is an opportunity to pull more of that moral authority together around some of these issues, because of Alfred Street’s stature? … Do you think that you can mold consensus about that a little bit, rather than finding it? … Maybe it’s not your job, I’m not trying to put words in your mouth.”

Wesley: “No, I think it could be. … I would love to see the gathering of the black churches in Alexandria around the right movement … Part of some of the dilemma that Alfred Street faces [is] that we have a lot of members who are not Alexandria citizens; we’re a commuting church … The politicians are concerned about the voters, not just the numbers; so our size gets us to the table; but, at the end of the day, how many of your members are voting?”

“How do you think churches can deal with this kind of thing, where your church is located here, your ministries are located here, but … a lot of your [commuting members] … don’t have the bandwidth to be political actors in two jurisdictions?”

Wesley: “… I believe Alfred Street is a national church, a national platform, that our cause and concern is not simply in our local area. … I [also] believe that the work of the church is to affect its community and affect the members of its church to go back to their local communities, if it’s not the same as the church, and make a difference … Our influence extends beyond. And that gets political awareness. … We have influence around the neighborhood. And the residents are in support. …”

“The early churches were churches of places — the church of Corinth, the church of Rome. … [And] just pragmatically … what probably touches most people’s lives most often [more than national politics] are decisions made by the Planning Commission, by the School Board. … I’ve been learning that there’s this theological [and] … pragmatic primacy of the local … Do you agree with that, disagree with that?”

Wesley: “I absolutely agree. … In the early ’60s and ’70s, if you went through a black community, black people sat on porches. The porch was a place of fellowship and a place of observation. … My biggest challenge is getting people out of the back yard, back on the porch; to have a vision and a mindset of a responsibility for much more than what’s happening in your home and your back yard, and to give a damn about what’s happening in the community … One of the cancers of contemporary Christianity is this ‘me, myself and I’ … That to me is one of the greatest distortions of the gospel. … I think in the evangelical [tradition] there’s more of a temptation for personal piety to override communal obligation. And there has to be a balance. We do have a personal, pietistic, moral ethic and imperative. But that also has to play itself out in an ‘I am my brother’s keeper’ [way].”

“Is 10 o’clock on Sunday morning still the most segregated hour of the week, and if so how can the churches be a vanguard to change that?”

Wesley: “… Clearly we’re still an African-American church. … I don’t think it’s anything wrong. There’s a historical rooting and there is a sense of, ‘I want to be in a space that affirms me — not blends me, but affirms me.’ … So I don’t think there’s anything wrong that First Baptist is 80 percent white and we’re 80 percent black. What needs to happen are moments when we worship together … to show that we worship the same God, we believe in the same Christ, and that there are opportunities for us to sit in each other’s presence and affirm that without hostility. And the witness to the world that presents is great.”