Plans are in the works to preserve while highlighting the area for adaptive reuse. 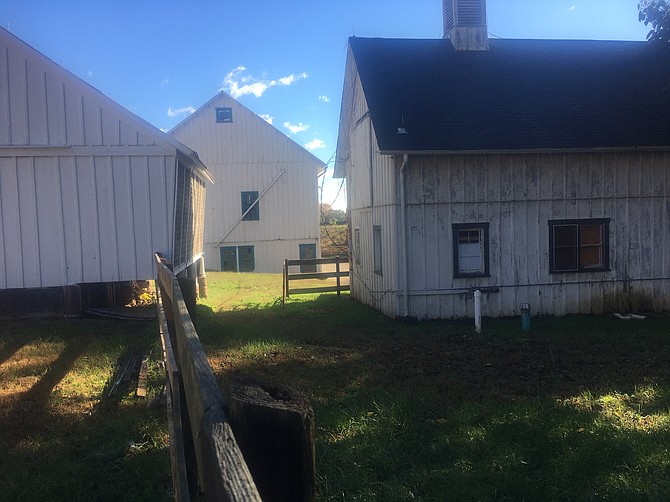 The existing structures at the Woodlawn Stables will be reused. Photo by Mike Salmon.

The barn and surrounding structures of the former Woodlawn Stables is poised to be redeveloped, leaving the character and history in tact while

The existing structures at the Woodlawn Stables will be reused.

introducing a commercial element that will be in tune with the atmosphere of the surrounding area.

According to Katherine Malone-France, the senior vice president for Historic Sites at the National Trust for Historic Preservation, the rustic appearance of the buildings will be part of a reuse plan. “We propose to adaptively reuse these buildings for businesses that interpret the agricultural history of the property and Virginia, which could include a farmer’s market, retail space/tasting room for products grown or made in Virginia, local garden center, or florist,” she said.

It was a move that was bound to happen with the growth of the Richmond Highway area, the advent of “Embark,” a transportation project that is emerging to improve the corridor. According to Fairfax County, “Embark Richmond Highway is a multi-faceted project promoting revitalization along a 7.5-mile segment of the Richmond Highway Corridor.” Woodlawn is listed as one of the areas of concentration where the project will emphasize “a tourism and neighborhood hub,” said Marianne Gardner, the director of the Fairfax County Planning Division in a Embark video the county produced.

At the stables site, “We are also proposing to add one new building to the barn complex that would contain a nanobrewery and café,” added Malone-France. A café could mean a place like Starbucks, which to some, is a coming to age sign, but if tastefully done, could be a boon to a downtrodden section of the highway.

“At the National Trust, we believe that putting these buildings back into active use and making them available to the public to experience and learn about their rich history is the best way to preserve them,” said Malone-France. They are currently working with the Fairfax County Architectural Review Board to refine the plan. A townhouse community has been proposed for a spot just north of the stables, which some see as positive growth for that area.

“The entire Woodlawn property has been owned by the National Trust since 1952. A portion of the property was rented by the stables that operated there,” Malone-France said in a statement.

Supervisor Dan Storck (D-Mount Vernon) is happy with the National Historic Trust plans, and looks at it as a positive step for the “cultural corridor” of Woodlawn that contains the stables, the Frank-Lloyd Wright house, the grist mill and coming-soon, the new Army Museum. “Their plans are very complimentary to the long term plans we have for the Richmond Highway - Mount Vernon Memorial Highway - Jeff Todd intersection,” Storck said.

The former Woodlawn Stables is officially known as the Sharpe Barn complex, a facility built in the early 20th century, during the ownership of the property by Elizabeth Sharpe, that is historic and significant as one of the last remaining examples of a barn complex of its type in Fairfax County, according to Malone-France.

Sharpe was a coal heiress who owned the Woodlawn Plantation from 1905 to 1925. When it was dismantled with the Richmond Highway widening and relocation project, many of the horses were moved to Claddagh Farm in historic Jeffersonton, Va. and others to a stable on Gunston Road. The road widening and relocation project was administered by the Federal Highway Administration Eastern Lands Division, a Federal Highways document, DHR# 029-0056, dated July 2006, the stables and land parcel was not designated as a National Historic Landmark.