What’s in a Toll? Unpacking the I-66 Controversy
Votes

What’s in a Toll? Unpacking the I-66 Controversy 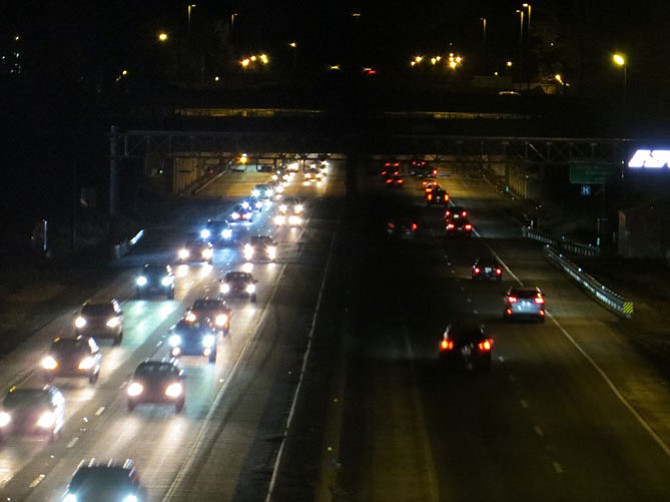 I-66 during evening tolling. Photo by Vernon Miles.

It’s a story that’s haunted commuters along I-66 over the last week. After years of planning, the implementation of the tolls was met with outcry from Richmond to beltway drivers.

The reality is a little more complicated.

Before last week, I-66 inside the beltway was only available to be used by HOV traffic with a few exceptions, like hybrid cars and people travelling to or from Dulles International Airport. On Dec. 4, this I-66 segment was opened up to non-HOV traffic, but those travelling on the highway without a passenger face a flexible toll based on traffic levels. At high traffic, the toll increases to try and dissuade drivers from further congesting the roads. A VDOT study released on Dec. 7 said the average round-trip toll price was $14.50, with morning trips costing an average of $10.70 and evening trips an average $3.80. But there is no cap set on the I-66 tolls, and the VDOT study did confirm that 34 vehicles, 0.29 percent of drivers, paid a peak toll of $34.50.

“The exorbitant toll prices that drivers are experiencing on I-66 are unacceptable,” House of Delegates Republican Caucus Chairman Tim Hugo said in a statement. “The McAuliffe Administration ... assured us tolls would only be roughly $6 or $7 on average. The peak tolls we are seeing today are much higher. [Gov. Terry McAuliffe] has gone on TV several times this week saying $40 toll prices are the way ‘it’s supposed to work.’ I could not disagree more. The hard-working people of Northern Virginia should not be forced to get a part-time job to be able to afford to drive to their full-time job.”

Frank Shafroth, director of the Center for State and Local Leadership at George Mason University, said the backlash shouldn’t have been surprising.

“It is rare for commuters to be ecstatic about seemingly abrupt changes, so when they are implemented, reactions in the short term are rarely enthusiastic,” said Shafroth. “Nevertheless, it has been increasingly clear that at times I-66 has become more of a snail route than an express highway, so Secretary [Aubrey] Lane had little choice but to try and institute changes. As we have noticed, those changes have led to some significant charges.”

Shafroth says there are a few potential benefits of the I-66 tolls. They will raise revenue to fund other VDOT missions. The I-66 lanes will help promote changes in driving habits, like carpooling or using other means of transit. Shafroth says the changes will make the transit less stressful for commuters.

“For Arlington and Fairfax, especially inside the Beltway, any changes which reduce single-occupant traffic during rush hours will lessen air and noise pollution, reduce the human and fiscal costs to police and fire responses to accidents, and reduce the risks associated with ‘cut-through’ practices where commuters race through side streets in order to try to bypass the main commuter thoroughfares.”

Local leadership was supportive of the I-66 changes.

“The plan was to design a variable toll facility that ensured a reliable trip and maximized the number of people going through the corridor, not just the number of vehicles,” said County Board chair Jay Fisette. “That invariably means a variable toll. They will take several months to tweak it but the commitment is that someone getting on that lane is going to travel a minimum of 45 miles per hour through there and reliably get to where they’re going, which is not the case today.”

Fisette noted that in the past, single occupancy vehicles were unable to travel during rush hour. No one with two or more people in the vehicle is charged anything today, so only drivers who were previously unable to drive on I-66 at all will now face a toll.

For Arlington, Fisette said staff is monitoring side road traffic to see if the new tolls have an impact. For the first week, the initial word is that the impact is negligible.

“That doesn’t mean we won’t continue monitoring and checking it,” said Fisette. “If there are impacts that are unacceptable or problematic, in conjunction with VDOT or around the improvement, we now have a pot of money to deal with that: the toll revenue. I don’t think after this first week that there’s a lot unexpected. Keep in mind: two or more people travel for free all the time. Most of the people charged tolls were not eligible to travel on that roadway in the past.”