VDOT plans to break I-66 gridlock with new tolls and HOV requirements. 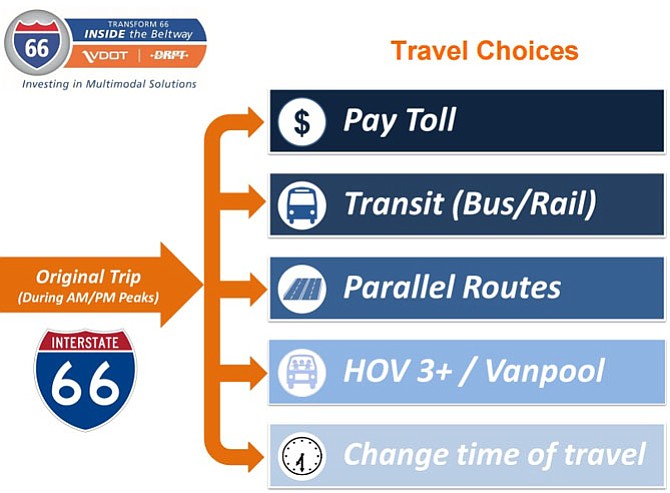 VDOT’s options for commuters on I-66 under new plan. Graphic Contributed

It’s not news that I-66 is a congested mess. It wasn’t a surprise to Deputy Secretary of Transportation Nick Donohue when Gov. Terry McAuliffe said it needed to be fixed, and the Arlington County Board wasn’t shocked to hear changes are underway to try to reduce the gridlock during peak hours. But with proposed solutions like a toll and an increase in the High Occupancy Vehicle (HOV) lane requirements, the changes could have a major impact on daily commuters.

“This is beginning to pick up speed, and it’s time to fully engage in this,” said County Board Chair Mary Hynes.

At the Sept. 24 meeting of the Arlington County Board, Donohue presented the state’s plan for fixing I-66. The reaction, as summarized by County Board member Jay Fisette, was cautious optimism.

“The demand for transit is going to continue to grow, and in the future it’s not going to be just during peak hours eastbound,” said Donohue. “I think you’re going to see strong travel demand both east and westbound in the mornings and evenings. We’re already beginning to see that happen.”

Donohue also said that he Department of Transportation can no longer rely on WMATA to pick up the slack for I-66.

“The Silver Line was the last major expansion [of the Metro],” said Donohue. “we need fast travel options beyond where WMATA currently exists.”

One of the primary strategies Donohue referenced is a plan to implement a toll on all non-HOV 3 vehicles. The increase from the current HOV 2 requirement to HOV 3 was initially approved by the Regional Transportation Board in 2010 in hopes of improving air quality in Northern Virginia. The toll would shift in cost depending on the status of road congestion, with an average $8 cost eastbound during peak hours and $9 cost westbound during peak hours. According to Donohue, every dollar made from the toll is legally required to be used in transportation projects in Northern Virginia.

Donohue also noted some of the exemptions from HOV requirements. Currently, hybrid cars with clean fuel plates issued before July 1, 2011, can use HOV lanes during peak hours with only one occupant. However, under the new plan, clean fuel vehicles will no longer be exempt from HOV restrictions. Without specifying whether there was a policy change, Donohue also noted that exception that allows drivers travelling to and from the Dulles Airport to drive in HOV lanes with only one occupant makes HOV enforcement difficult. When pulled over, Donohue says many drivers state that they’re travelling to the airport, which is impossible for the police officer to refute without following the driver to his or her destination.

Other proposed solutions included new bus routes along I-66, priority access for “vanpool” programs, and support for telework programs. However, if these options do not reduce traffic on I-66, Donohue said that the Department of Transportation would consider plans to widen I-66. However, Fisette noted that the first review of the program’s implementation occurs in 2022, meaning that if the new program doesn’t work: road widening wouldn’t take place until 2024 at the earliest.

Other members of the County Board expressed frustration with some of the poor relations between the Department of Transportation and local citizens. County Board member Libby Garvey said she heard from many residents the Department of Transportation had failed to follow up on its promise to inform neighbors when night work was imminent. Donohue apologized on behalf of the department and said he would investigate the concerns and report back to the board.

County Board Member John Vihstadt expressed concerns that the new toll plans could negatively impact National Airport. With several public meetings on the topic throughout October, Vihstadt asked if there were any specific situations where the plan had been influenced by public feedback. Donohue responded that the initial plan had included immediately changing I-66 to HOV 3, but public comment had influenced Department of Transportation staff to delay the HOV requirement change until 2017, when tolling begins.

The next public hearings on the I-66 changes are: