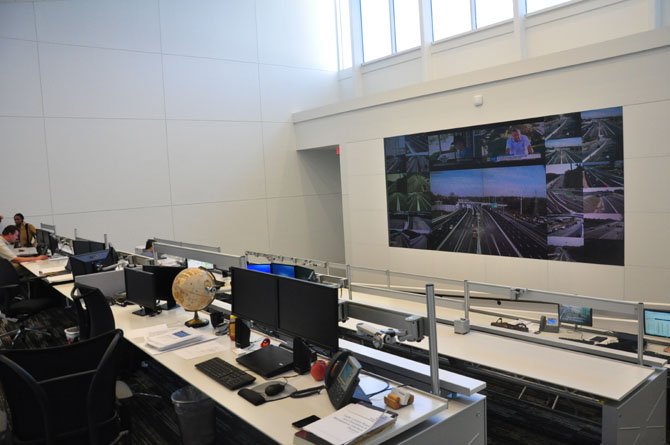 The main screen at the 495 Express Lanes Operations Center in Alexandria, which provides complete coverage of the lanes in order to set the toll pricing. Photo by Alex McVeigh.

Alexandria — As the construction equipment and debris is cleared from the new two left lanes going both ways on the Virginia side of the Beltway, the 495 Express Lanes are coming closer to opening. The variable-priced toll lanes will run over most of the Virginia section of the Beltway, and the $2 billion project has included the new lanes, as well as the rebuilding of bridges and overpasses along the way. 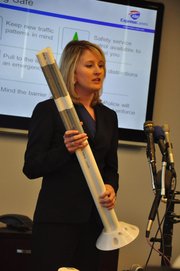 Jennifer Aument of Transurban-Fluor shows one of the barriers that will separate the 495 Express Lanes from the regular Beltway Lanes at a briefing at the new 495 Express Lanes Operations Center Wednesday, Oct. 17.

"The project is moving forward very quickly, we expect a late fall 2012 opening, and we’ll do our best to give about a three-week notice on the exact date," said Jennifer Aument, vice president of Transurban-Fluor, the company in charge of the project. "About a week before opening, drivers are going to start to see some changes out there. When it can be done safely, the signs will start to be uncovered, and signals will be uncovered on key arterial routes like Route 7.

When it comes to the lanes opening for traffic, Aument said it would be "in the middle of the night, during the weekend period, approximately midnight to 2 a.m."

Once the lanes are open, the prices will be updated as conditions dictate, in order to keep the traffic moving as close to 55 miles per hour as possible. Their contract mandates traffic move at a rate of at least 45 miles per hour, per a federal mandate on managed lanes.

"The rates based on the travel demand. The way we will measure travel demand is three times per mile we have detector stations that will give our control center information as to what the volume and speed of traffic is," said Rob Kerns, operations manager with Transurban. "Our dynamic pricing is scheduled to update every 15 minutes, which means there is the opportunity but not an obligation to change every 15 minutes, if a change is appropriate."

The Express Lanes are broken into segments by exits, and each segment has its own price, and drivers will be charged as they drive through segments to their final destination.

"For example, if you’re going from the Springfield Interchange to Route 66, you would pass through four pricing segments, Braddock Road, Gallows Road, Lee Highway and Route 66," Kerns said. "Based on the prevailing traffic conditions in each of those sections, the pricing will be determined through the sum of those segments."

Kerns said that their current models have shown prices around $3 to $6 during rush hours and $1 to $2 during non-rush hours, per full trip.

Drivers in cars, hybrids and trucks will be tolled, unless there are more than three people in the vehicle. Vehicles with three or more people can ride toll-free, but the vehicle must have the new EZ Pass Flex.

The EZ Pass Flex has a toggle switch that allows users to switch between toll and non-toll mode. State Police officers will be monitoring the lanes for compliance. All vehicles except motorcycles will need to have the EZ Pass Flex to ride toll-free, motorcycles can use the lane toll-free without an EZ Pass.

More information is available at www.495expresslanes.com.