Updates on three road-widening projects there. 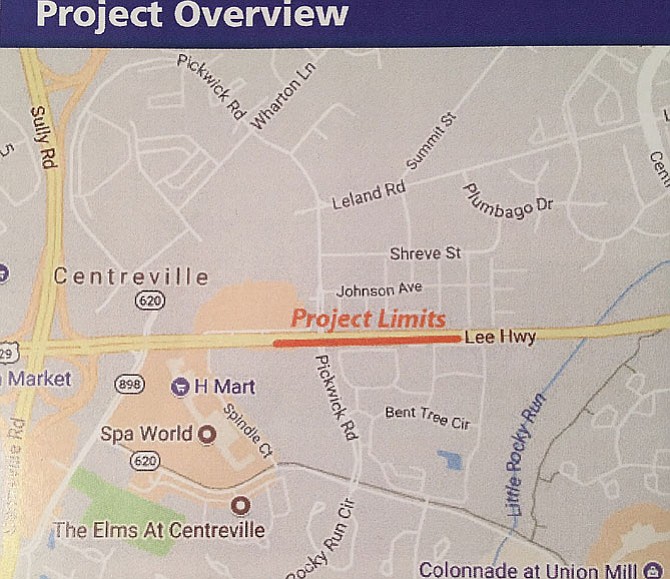 Route 29 north will be widened from two lanes to three from just south of Pickwick Road to a quarter-mile north of it.

There’s good news for drivers who travel on Route 29 (Lee Highway) in Centreville in the vicinity of the Colonnade at Union Mill shopping center. Three road projects in that area are now moving forward — and all are geared toward relieving congestion and increasing capacity.

Earlier this fall, VDOT held a design public hearing at its Northern Virginia District Office in Fairfax regarding its plan to do spot widening on Route 29. This project will add a third lane to northbound Route 29 from just south of Pickwick Road to a quarter-mile north of it, almost to Union Mill Road.

Route 29 southbound currently has three lanes, and this work will continue those three lanes in each direction from Route 28 to Union Mill. As things are now, high traffic volumes on Route 29 cause heavy congestion during weekday morning and evening rush hours.

According to VDOT, northbound Route 29 averages some 33,000 vehicles per day, and existing traffic volumes are anticipated to increase by 25-30 percent by 2040. Construction is scheduled to begin in summer 2018 and end late that year. For more information, go to www.virginiadot.org/projects.

Preliminary engineering is estimated to cost $963,000, and right-of-way acquisition and utility relocation, $500,000. The actual construction is expected to cost about $3.9 million.

Fred Moomay, with the in-house design group at VDOT’s District Office, said the project has two parts. One is the right-turn lane from Route 29 to Pickwick Road south. It’ll be 100 feet long, with an eight-foot-wide trail and a two-foot-wide, grass buffer strip.

“This is my commute from home to work, in Chantilly, in the morning,” said Del. David Bulova (D-37). “Have you considered some safety improvements, such as rumble strips or a small, raised median between the two directions?”

“Our road width is tight,” replied Moomay. “It’s a good point, but we only have room for the three, 11-foot-wide lanes on each side, plus the turn lanes.”

Gene Weldon, assistant location and design engineer on this project, said, “We haven’t had safety issues there.” Another VDOT engineer said they could look into something similar to rumble strips, but quieter, to warn drivers when their vehicle drifts into another lane.

State Sen. Dave Marsden (D-37) asked whether the utilities there would be undergrounded, but the engineers said they weren’t planning on it. Bulova also asked if undergrounding was in their future plans for that area and whether VDOT could do it while they’re “digging stuff up there. Then they could re-prioritize so they could do that at the same time.”

Moomay said they could mention it to VDOT. He also noted that, although this is a relatively small project, in terms of length, “It’s an important section of several road projects that will eventually result in three lanes from Fairfax through Centreville.”

So far, it’s slated for the start of plan design in early 2018, with a public information meeting in late spring. A design public hearing would be held in late 2018, with design approval hopefully by early spring 2019. Right-of-way acquisition would begin in fall 2019, with advertisements for construction going out in spring 2022.

This is currently the last segment of Route 29 between the City of Fairfax and Centreville that’s not six lanes, so this work would eliminate the last remaining bottleneck. Cost estimate is $32.7 million; if all goes well, preliminary engineering could start as early as July 2018.